In “Bonds – More Than Meets the Eye”, we proposed that despite historically low interest rates there may be opportunities in Treasury Bonds to earn total returns well in excess of their current low yields. In this article, the second installment of a three part series, we analyze some important factors which help determine where interest rates might be headed in the near term.  This article focuses on the demand side of the supply/demand curve to understand pricing pressures. Part 3 of this series will emphasize the supply side of the curve and key determinants of interest rates including economic growth and inflation.

In Economics 101 students are taught that prices for goods are largely determined by the intersection of the demand and the supply curves as pictured to the right. The price to borrow 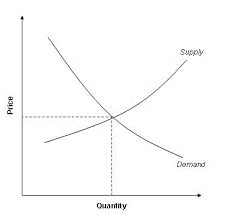 In 1951 total U.S. credit outstanding (including the government, corporate and private sectors), as shown in the graph below, was $445 billion and stood at 134% of GDP. Since then it has grown to nearly $60 trillion, and currently stands at over 330% of GDP. The consistently growing proportion of debt to GDP over this term is a clear indication that the marginal productivity of debt has dropped considerably. In other words a dollar of credit is not generating economic growth at nearly the pace of years past. As the growth of debt (credit) outstrips economic growth, the ability to service and ultimately pay-off the debt becomes increasingly challenging. The first graph below shows the massive increase in total credit outstanding (black line) and the annual percentage growth of credit outstanding (green line). The second graph shows the increasingly unproductive nature of new debt as highlighted by the amount of debt required to generate $1 worth of GDP. 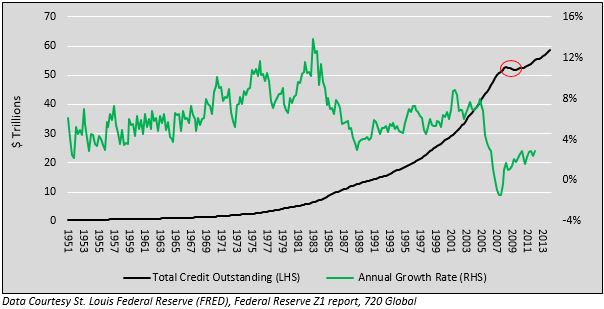 Amount of Credit Required to Generate $1 Worth of GDP

Beginning in the 1980’s the Federal Reserve became increasingly aggressive in employing below normal interest rates and de-regulating banking to encourage increased borrowing and stimulate economic growth. As noted earlier, one consequence of the Fed’s action was to promote an increase in debt, which was less productive, thereby providing marginally less economic benefit.  Despite the Feds intentions, debt growth and economic growth hit a wall in 2008 when total credit outstanding shrank for the first time since WWII (red circle in the first graph above). Since the great financial crisis, the Fed has used ever more unconventional monetary policy measures in efforts to reignite the demand for borrowing. Such measures have included unlimited borrowing authority by banks, a prolonged zero interest rate policy and trillions of printed dollars through multiple rounds of quantitative easing (QE) among others. The end result has been 7 years of extraordinarily easy monetary policy and a quadrupling of the U.S. money supply.

Despite this historic policy, unprecedented actions and resulting cheap borrowing rates, demand for borrowing remains lethargic.  Since 2010, outstanding credit has grown at a 2.5% annualized rate – far from the 6.5% average growth rate of prior decades. Borrower behavior since the crisis of 2008 serves as a warning that the U.S. has a limited ability and willingness to borrow. In other words, there are limits as to how much one can increasingly borrow more than ones income. The likely consequence is that the demand curve in the interest rate pricing model may continue to shift to left which may likely keep a cap on interest rates.