Disclaimer:
While an investment in managed futures can help enhance returns and reduce risk, it can also do just the opposite and in fact result in further losses in a portfolio. In addition, studies conducted of managed futures as a whole may not be indicative of the performance of any individual CTA. The results of studies conducted in the past may not be indicative of current time periods. Managed futures indices such as the IASG CTA Index do not represent the entire universe of all CTAs.

The Fed’s normalisation process has been a tortuous on/off affair primarily because their focus has been almost entirely on not upsetting the financial markets rather than doing the right thing for the long term health of the US economy. This week, the Federal Reserve machine cranked into action to persuade markets that they want to raise rates before the Summer and again before year end. So far, the reaction has been quite muted, but it is far from certain that this calm veneer will continue. Let’s dive in and think about what the Fed are doing and what this means for markets.

We have little doubt that a truly independent Fed would realise that their policy setting is just plain wrong in terms of the domestic economy. It has been wrong for years now, and we know why this is so. The Fed is continuously worried about upsetting financial markets if they remove the punch bowl. They are also now worried about Dollar strength, vulnerable global growth, low commodity prices and political  uncertainties. Despite the rally in asset prices in the last two months or so, none of these uncertainties have actually been resolved, and so it is unclear why the Fed have altered their narrative this week, especially ahead of the G7 meeting next weekend.

Whatever the reasoning for the alteration in policy, more rate rises than previously expected by markets will have an effect on prices. The most sensitive to faster rate rises will be the front end of the US yield curve, and probably the US Dollar as policy divergence becomes more obvious again. Chart 1 below plots the Fed Funds mid point versus 3 month Libor and the two year Government bond yield. What is clear is that prior to the rate rise in December, US interest rates were already rising in anticipation. At the moment, the market has barely begun to price in a second rate rise, never mind a third or fourth. We expect short end US rates to rise assuming the Fed can deliver on rate rises. 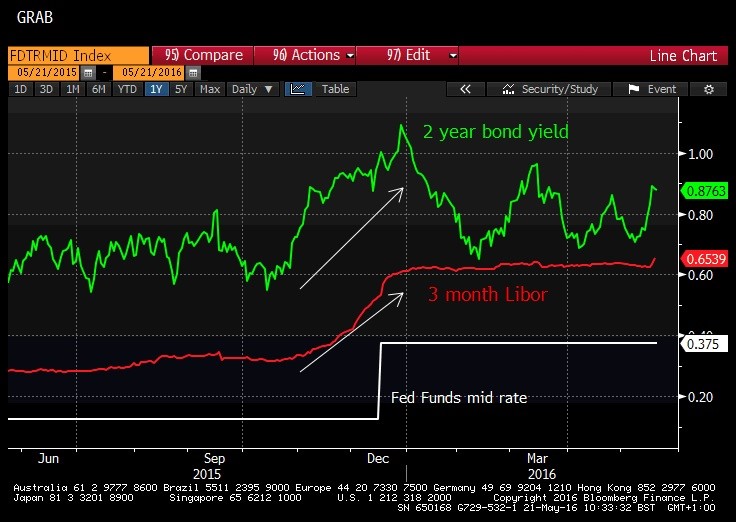 Perhaps the largest impact in markets will be the value of the US Dollar. The key here is that further rates rises demonstrate the clear divergence in global policy as all other central banks remain committed to maintaining extremely easy policies, or even moving further into uncharted extremes. If we assume that US 2 year yields rise back above 1% and German yields remain mired around current levels of minus -0.50%, then the yield differential will widen well past 150 basis points in favour of the US. We illustrate the yield differential in chart 2 below alongside the EUR/USD exchange rate. On this basis, it is possible to envisage the EUR/USD exchange rate going down to test this year’s lows near 1.08 and even last year’s lows around 1.05. 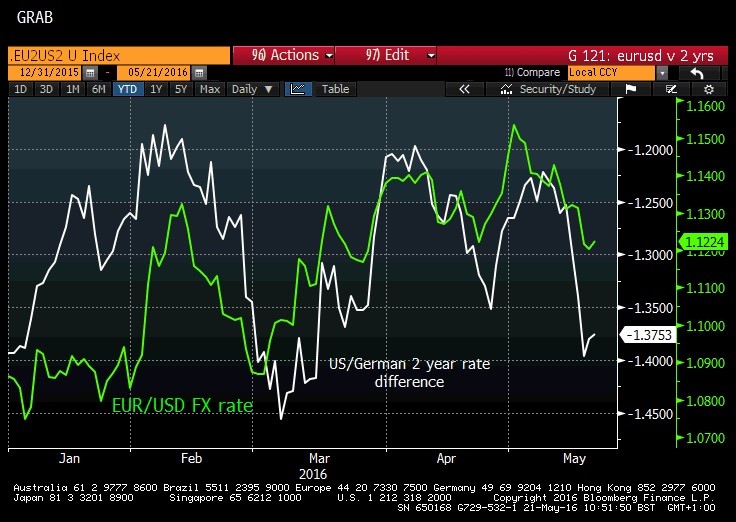 Having warmed to the Dollar at the end of April and moving to outright bullish in early May, the more hawkish Fed posture and the resulting broad Dollar strength is very welcome for us. Nothing moves in a straight line, but unless the Fed now reverses course and fails to raise rates at either the June or July meeting, we expect to remain bullish of the Dollar across the board, with an emphasis on being bearish Emerging Market and commodity currencies.

In the bond markets, our key takeaway is how the yield curve continues to flatten as short end rates rise faster than longer dated bond yields. The difference between ten year and two year yields is around 0.95%, down from nearly 1.10% just a few weeks ago and 1.45% last November before the first US rate rise. We believe that this flattening of the yield curve is extremely important. First, a flattening of the yield curve historically indicates weak or weaker economic growth ahead. Secondly, if the curve actually inverts, this is historically one of THE single best recession indicators known to mankind.

Chart 3 below shows the year on year real growth rate of the US economy, and the US yield curve advanced by 8 quarters. It is clear that movements in the yield curve have a reasonable correlation with future growth. It is also clear that once the yield curve has inverted, the economy is at real risk of recession. The only time when US growth exceeded that predicted by the yield curve was in the late 1990s when demographics, globalisation, productivity and financial liberalisation were fantastic tailwinds. 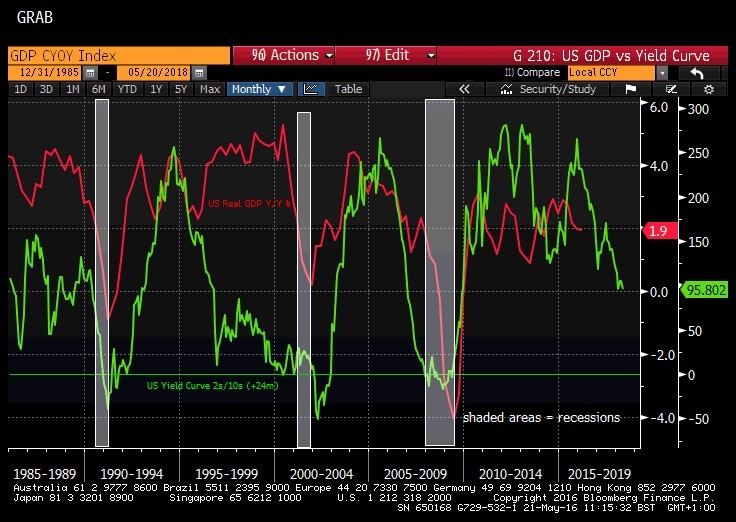 With the structural headwinds that we have discussed in recent months, we strongly believe that the yield curve will flatten further if the Fed continues to raise interest rates. Will the curve actually invert in the months ahead? Possibly, although the Fed will most likely refrain from being too aggressive if trouble erupts again in markets. At the very least, we expect economic growth to remain low, and with policy ridiculously easy in other developed economies encouraging a global search for safe yield, US ten year bond yields should remain fairly well anchored around current levels just below 2%.

As for equities, the reflation trade that began in February has clearly stalled in the last few weeks, with emerging markets displaying the most immediate vulnerability. We continue to believe that developed equity markets are vulnerable as well, and although the change in tone at the Fed has not led to an immediate sell off, we are sticking to our bearish thesis. US equities continue to be egregiously overvalued but also continue to outperform in the very short term. This is a pattern we have seen before the sharp sell offs in October 2015, August 2015 and January this year. We are thinking something similar may happen again soon.

To try and wrap things up for this week, it appears that the Fed have made an active decision to change the market’s outlook for rate rises and become more hawkish than expected. They didn’t have to do this, and so unless there is a market sell off (quite possible in our opinion) or global event, we have to expect the Fed to raise rates before the Summer and maintain a slightly hawkish bias. We believe that this will be bullish for the Dollar, bearish for global equities and neutral for longer dated bonds.

The altered Fed policy makes for a very interesting period ahead, quite possibly an increased level of global volatility and difficult markets at a time when most investors are struggling to make money over the last 12 months and year to date. Confidence in markets, policymakers and the outlook for the global economy is pretty fragile, and it only takes one or two small upsets in this sort of environment to really throw a spanner in the works. Defensive and tactical investment approaches continue to offer attractive options for the current time period and likely for some time to come. For our part, we are bullish the Dollar and bearish on equity markets whilst watching the Fed very carefully for any backtracking from their new found hawkish bias.