Disclaimer:
While an investment in managed futures can help enhance returns and reduce risk, it can also do just the opposite and in fact result in further losses in a portfolio. In addition, studies conducted of managed futures as a whole may not be indicative of the performance of any individual CTA. The results of studies conducted in the past may not be indicative of current time periods.

The Federal Reserve had held the Fed Funds rate within a fraction of zero for over six years, before raising it to a target rate of 0.25-0.50 on Dec 16, 2015. It is highly anticipated that a second rate hike will occur this summer, with the speculators leaning toward a July hike.

The general rule of thumb in equity investing is that you do not Fight the Fed, and there is a lot to be said for that thesis. Naturally, one has to respect the idea that higher rates provide more competition for equities in the traditional equity/bond portfolio, and vice versa when rates are low. I have actually spent, who knows how many, hours trying to model equities vs interest rates and I learned several lessons in the process. Primarily that rates high and rising are indeed not conducive to higher equity prices. However, rates low and rising are not as reliably equity unfriendly. And one can make a case that rates Low and rising are initially actually very good for equities. My studies suggested a high correlation between equities and rates when rates were high, not as much when rates were low.

Famed technician Edson Gould came up with the axiom many a decade ago, of ‘Three Steps and a Stumble’, which is widely quoted by technicians and suggest you should sell equities after three straight rate hikes.  Tis important to note, the reason it wasn’t ‘One or Two’ Steps and a Stumble, is because not only is the first rate hike not usually Bearish for equities, it is actually normally Bullish, as customarily you are coming from a low interest rate environment, which doesn’t provide much competition for equities and the economy is now coming out of a recessionary environment in which there is enough perceived growth to warrant raising rates. And if the economy is starting to grow, so shall company earnings, which should more than offset the modest competition interest bearing securities after a first rate hike.

Much of the problem we have with coming up with simple interest rate axioms which apply today, is that we are in an unprecedented zero rate interest rate environment and many of the trading rules developed over the last 50 years were developed across the inflationary databases of the 1970-80s. I have Tbill data going back to 1950 and the only time period in the last 65 years which remotely looks monetarily anything like today, is the 1950s, a decade, in which rates rose from 1.07% to 4.40%. You will see below, that during that decade, the S&P rose 250%. In fact the only two down years for equities were 1953 and 1957, years in which rates actually dropped. 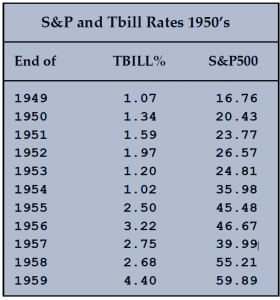 My instincts are the first couple of rate hikes will be met with initial shortterm, knee jerk selloffs in equities, which should reverse and over the intermediate term, work higher. Bears will point out that the 1950’s rally was possibly an aberration resulting from a decade of pentup buying supply resulting from the decade long World War II.

Witter & Lester Inc. is a registered CTA with the National Futures Association.  G. Wayne Wayley is a principal of Witter & Lester.

Richard L. Lester, President and co-founder of Witter & Lester Inc., attended the University of Alabama in Huntsville and holds an Associate Degree in Business Administration from Calhoun Community College. He has been registered with the Advisor as an Associated Person and Principal since inception of the Advisor, March 1988.

G. Wayne Whaley, Executive Vice-President for the Advisor since 1993 and principal since 1998, holds a B. S. degree in the Science of Mathematics from Jacksonville State University and a M.S. degree in Operations Research (Applied Math) from Georgia Technological Institute. He has been registered with the Advisor as an Associated Person since July 14, 1995, and as a Principal since, March 20, 1998.