Many traders and investment managers have the desire to measure and compare CTA managers and / or trading systems. Red Rock Capital believe risk-adjusted returns are one of the most important measures to consider since, given the inherent / free leverage of the futures markets, more return can always be earned by taking more risk. The most popular measure of risk-adjusted performance is the Sharpe ratio. While the Sharpe ratio is definitely the most widely used, it is not without its issues and limitations. Red Rock Capital believe the Sortino ratio improves on the Sharpe ratio in a few areas. The purpose of this article, however, is not necessarily to extol the virtues of the Sortino ratio, but rather to review its definition and present how to properly calculate it since we have often seen its calculation done incorrectly.

The Sharpe ratio is a metric which aims to measure the desirability of a risky investment strategy or instrument by dividing the average period return in excess of the risk-free rate by the standard deviation of the return generating process. Devised in 1966 as a measure of performance for mutual funds, it undoubtedly has some value as a measure of strategy “quality”, but it also has a few limitations (see Sharpe 1994 for a recent restatement and review of its principles).

The Sharpe ratio does not distinguish between upside and downside volatility (graph 1a). 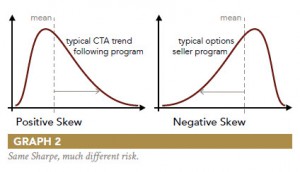 In many ways, the Sortino ratio is a better choice, especially when measuring and compar­ing the performance of managers whose programs exhibit skew in their return distributions. The Sortino ratio is a modification of the Sharpe ratio but uses downside deviation rather than standard deviation as the measure of risk—i.e. only those returns falling below a user-specified target (See “desired target return,” graph 1b), or required rate of return are considered risky.

In the early 1980s, Dr. Frank Sortino had undertaken research to come up with an improved measure for risk-adjusted returns. According to Sortino, it was Brian Rom’s idea at Investment Technologies to call the new measure the Sorti­no ratio. The first reference to the ratio was in Financial Executive Magazine (August, 1980) and the first calculation was published in a series of articles in the Journal of Risk Management (Sep­tember, 1981).

As the definition depicts above, where: 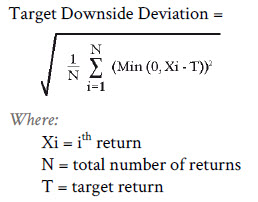 The equation for TDD is very similar to the definition of standard deviation: 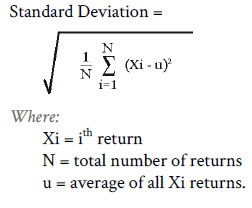 This defines both the Sharpe and Sortino Ratios and how they are applied.  We will take a closer look later this week at the differences between these two ratios.