Over the past year, the real trade-weighted U.S. dollar (USD) index increased over 10%, fostering a slowing of global economic growth, increased volatility in financial markets and plummeting commodity prices. This serves as a reminder of the influence the USD has on global trade and asset markets. Periods of dollar appreciation, as highlighted in the graph below, are not well understood by the investing public as there have been only two major appreciation periods since the removal of the gold standard in 1971. The potential consequences from a third major USD appreciation can have a significant effect on expected asset class returns. 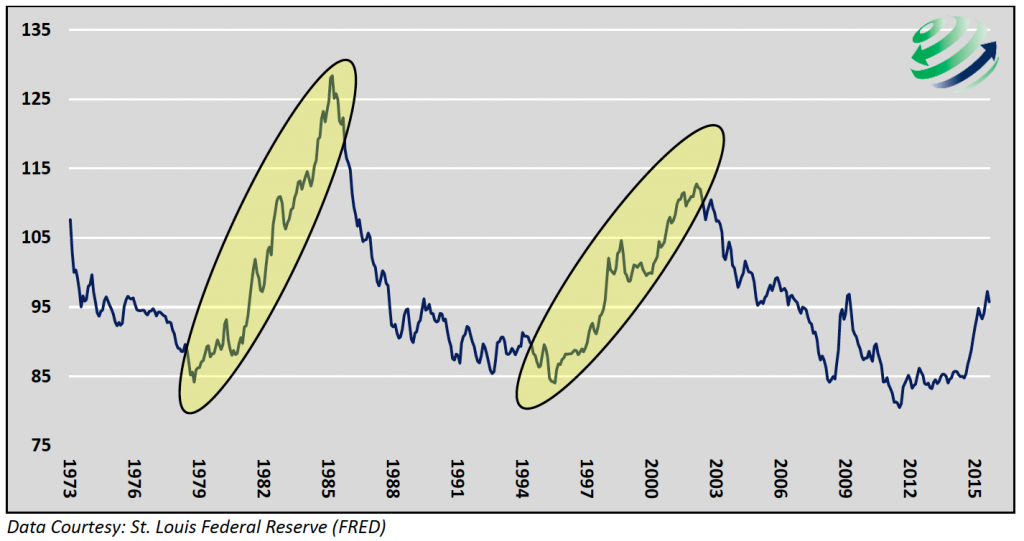 This essay is the first part in series that will examine the role the USD plays in global trade and financial markets. Specifically, it will help the reader appreciate the history behind the world’s reserve currency, and understand the influence it has on global borrowing and lending.

The 1944 Bretton Woods agreement, paved the way for the USD to replace the British pound as the world’s reserve currency. This status was earned over centuries as the U.S. grew from a British outpost to the largest economic and military power of the world. Democracy, capitalism and the rule of law facilitated the privilege. Additionally, the U.S. boasts the world’s largest and most liquid capital markets making reserve currency status not only fundamentally salient but technically desirable. The USD, also referred to as the “anchor currency”, “funding currency” and “safe-haven currency”, is the medium by which the majority of global transactions occur, regardless of whether a U.S. entity is counterparty in the transaction.

The USD Role as a Funding Currency

The combination of the world’s most liquid capital markets and the prevalence of the USD in the majority of global financial transactions, make USD borrowing a top choice for foreign entities when they do not borrow in their native currency. U.S. based investors seeking to diversify assets into foreign markets without taking on currency risk provide ample funds to such borrowers. Additional liquidity can also be sourced from a wide variety of international institutional investors as most of them have some portion of their portfolio denominated in USD. Further sustaining the use of USD in foreign transactions is investors involved in the so called “carry trade”. In this arrangement investors (domestic and foreign) borrow in USD then convert the proceeds into a foreign market promising higher yields. The success of this strategy, which introduces foreign exchange risk, is predicated in part on continued weakness of the USD relative to the foreign currency.

The volume of USD borrowed, for foreign purposes, is heavily dependent on the value of the USD relative to other currencies. In the scenario where the foreign currency strengthens relative to the USD, the foreign denominated funds required to re-pay the USD loan decrease, effectively lowering the cost of borrowing. Conversely, during periods of USD appreciation borrowing in USD is not as popular as the cost-benefit to foreign borrowers and U.S. based investors is reduced. Consequently, USD strength or weakness heavily influences borrowing in currencies of all types, and thus international monetary supply. In a global economy, largely dependent on debt, monetary supply is the fuel governing the pace of global economic engine.

The next installment of this article will explain why the emerging market economies are much more affected by a strengthening of the USD and the precarious position China finds itself in as a result of their peg to the strong USD.