The U.S. Dollar and the Emerging Markets

Economic damage due to U.S. dollar (USD) strength is experienced globally, but the emerging market economies tend to be most affected.  This occurs predominately for two reasons:

Historically, periods of USD appreciation have led to outflows of investment dollars resulting in economic hardship, crisis and even regime change in emerging market nations. The 1997-1998 Asian crisis, the related default of Russia and the collapse of the hedge fund Long Term Capital Management, for instance, were precipitated by a strong USD and a rapid reversal of capital flows from Asia back to the U.S. It is estimated the crisis resulted in the repatriation of $250-$500 billion.

The Bank for International Settlements (BIS) estimates that there is currently over $9 trillion of USD (the carry trade) that has been lent abroad. It is likely $1.0-$2.5 trillion of that amount is invested in China alone, well in excess of that which, when repatriated, precipitated the Asian crisis. Years of historically low U.S. interest rates and a depreciating USD coupled with insatiable investor demand for investments with “excess” yield played a significant role in bolstering the size of the aforementioned carry trade.  It is important to note that the carry trade by definition has an embedded USD short position. If that trade were to unwind, demand for USD would increase as these positions are covered. This in turn could fuel the USD higher as a higher USD results in more carry trade unwinds in a vicious and self-reinforcing cycle.

The economic growth this capital supports has been tremendous making the potential ramifications of a USD repatriation more concerning then that which occurred in the late 1990s. The graph below illustrates the tight correlation between the USD and the emerging markets. The USD index is inversely scaled to better highlight the relationship. 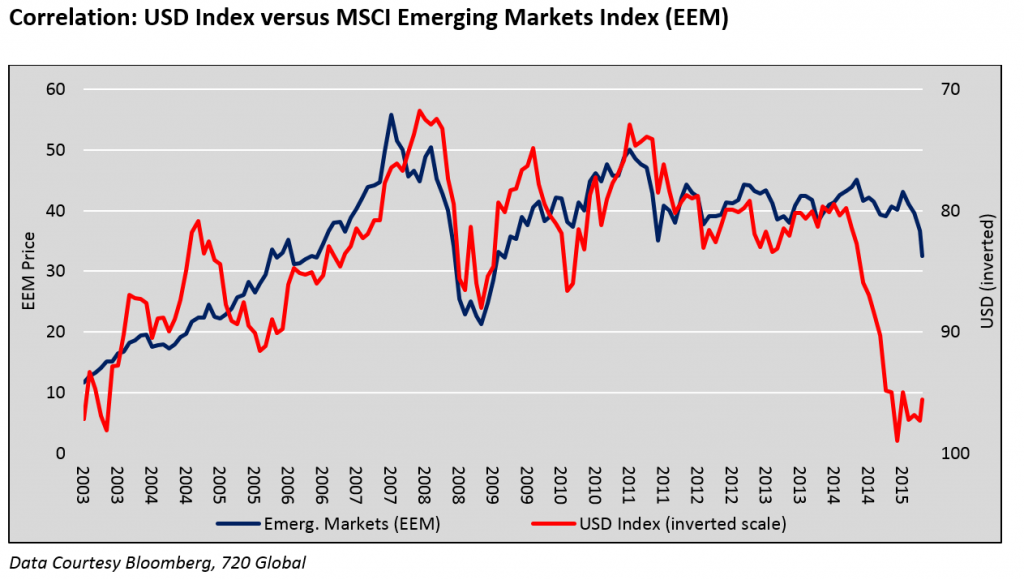 Over the past year the MSCI Emerging Markets Index (EEM) fell 25%, directly and indirectly the result of slowing economic growth in China. Reacting to the slowdown, China softened their currency’s (RMB) peg to the USD, with an initial 3% RMB devaluation. China is in a tough spot. Maintaining the USD peg would further limit economic growth as Chinese exports become more expensive relative to other exporting nations as the USD appreciates. Devaluation, on the other hand, will risk a significant reversal of carry trades and potentially destabilize global financial markets.

China will likely continue to devalue the RMB over time, resulting in continued USD strength, further weakness of the commodity complex, slowing U.S. corporate profits and increased demand for U.S. Treasury securities. In this scenario the pain currently felt by some emerging market economies may not be over.

Commodity prices are denominated in USD, thus making their price a function not just of supply and demand but also the value of the USD. The significant effect the USD plays on commodity prices will be examined in the next installment.