The first goal of investing is to increase wealth or said differently, to increase purchasing power.  Warren Buffet is quoted as saying “Rule number 1 of investing is never lose money.  Rule number 2 is never forget rule number 1.” The hidden message in these seemingly obvious statements is that building wealth depends much more on preventing large losses than it does on achieving large gains.

While all investment strategies aim to make money, most investment managers employ different variations of a passive approach commonly known as a “relative return” or Modern Portfolio Theory (MPT) model.  Under this approach, managers diversify investments between asset classes (typically stocks and bonds) and then hope for the market to deliver positive returns. In the end however, you get the return the market decides you get. The performance of a relative return manager is almost entirely dependent upon the general direction of the market.

The investors in passive strategies expect a market-based return with the hope for additional gains, otherwise known as alpha. The embedded assumption is, of course, that the market will continue to rise indefinitely and at a greater rate than inflation. As we know, and were reminded of in 2000 and again in 2008, this is not always the case.  The 2000-2002 and 2007-2009 declines cut the stock market value by over 50% in both instances. During those timeframes, relative return managers whose returns were less negative than those of the market claimed victory at having lost only 30 or 40%!  It can be difficult to build wealth with such a strategy in an environment like the last 15 years, as one’s net worth routinely gets impaired significantly.  While true that the stock market, as a long term investment, has generally delivered relatively good returns, there have been long stretches of time where this has not been the case. The graph below highlights such periods where the real, or inflation adjusted, price of the S&P 500 stagnated. 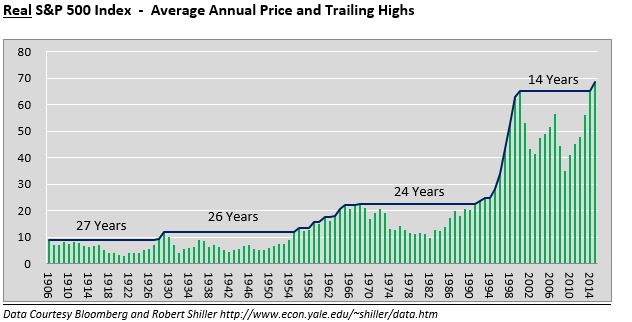 An alternative, action-based strategy to investment management is an absolute return strategy.  It is “action-based” because the returns of the portfolio are derived primarily from the actions of the investment manager.  The manager is not beholden to a pre-determined, model-based allocation but rather is continually engaged in finding cheap securities to own or over-valued securities to sell.  In short, an absolute return manager seeks to generate positive returns without regard for whether the market trend is bullish or bearish.

Absolute return strategies seek return objectives based on a spread over the rate of inflation as opposed to passive strategies which base returns on historical-based assumptions that the market will return say 8% just because “it always has”. Absolute return managers use sound logic to arrive at a reasonable target that, if achieved, guarantees an increase of wealth and purchasing power.  Their objective truly is geared toward avoiding losses over some reasonable time-frame at all costs.

An example of an absolute return goal may be CPI + 4% for a retiree. At that rate the retiree can potentially sustain their lifestyle without eroding their capital base.  An endowment with a 6% spending policy would aim for a target return of CPI + 6% on a similar premise.  Achieving or exceeding the targeted return ensures that wealth and purchasing power are at a minimum sustained.  This approach also affords a clear and specific benchmark against which a manager may be held accountable.

Absolute return strategies require more knowledge, skill and rigor than traditional passive strategies, which make them inherently more difficult to execute. This helps explain why so many investment managers choose to pursue market-dependent passive strategies.  After all, who wants to be held accountable if, in bad years, they can simply throw their hands up and say “who knew the market would fall 50%?”

Managing an absolute return portfolio successfully typically requires help. Selecting professional managers that employ strategies in the alternative space along with traditional strategies when warranted allow individuals to create such a portfolio.

In the next article of this series we will discuss the specifics of absolute return strategies and how to consider making them a functional part of an investment portfolio.