In quite a few ways, recent weeks have been anything but boring. Trying to filter out important events from random noise in markets today feels like a bit of a mugs game, but that shouldn’t stop us from trying if we think that we can add some value to our investors. We would like to pick up on a couple of areas that are gaining our attention, and we’re certainly not alone, so here goes with our version of events.

First, a quick look at Government bonds. Having plummeted to record low yields in the days immediately after Brexit, we were happy to openly question whether bonds were in a bubble. Although the obvious bubble candidates were the negative yield club in Europe and Japan, UK and US yields also collapsed to record lows. Assuming that the world was not slumping into a new recession (which was certainly not the message from equity markets), these record low yields were simply a manifestation of current central bank policies, and not sustainable in the long term (years, not months).

After years of monetary policy dominance, it would appear that fiscal policy may well be stirring, and we wonder aloud whether this will eventually be the undoing of the multi-decade bull market in bonds?

The upper house elections last weekend in Japan gave PM Abe the green light for more economic policy action. Although the three arrows of Abenomics relied almost entirely on monetary policy, there is talk of a significant budget in the near term. If this is anywhere near successful in galvanising some sort of growth, then the low yield of minus -0.29% has to be seen as insanely low. Of perhaps more significance (and denied in official quarters so far) is talk that the fiscal expansion will be financed by the Bank of Japan, or what is now known as helicopter money.

As far as we are concerned, when Governments start to print money to finance their spending, then investors should simply avoid all Government liabilities, which is essentially bonds and cash. So, in market terms, we wish to avoid (or even sell short) the Japanese Yen and Japanese Government bonds.

We also need to recognise that both candidates in the US election to be held in November are likely to promote fiscal expansion. And in Europe, fiscal laxity is alive and well in several important Eurozone countries, and perhaps a Europe rattled by Brexit will in the end conveniently ignore greater fiscal deficits if eventual reforms are promised. In the UK, the balanced budget by 2020 has been abandoned and a cut to the corporate tax rate has been proposed.

With fiscal expansion beginning to wake up and monetary policy set at warp speed, current Government bond yields have simply reached unsustainably low levels. So, we sit here wondering whether the rise seen in yields in the last few days is simply a small round of profit taking, or a sign that the multi-decade bull market in bonds has ended. With losses guaranteed for buy and hold investors in Europe and Japan, we absolutely have no interest in owning these assets. In fact, how can an asset be in a secular bull market when losses are now guaranteed?

In the US, as indicated in Chart 1 below, it would take a rise in yields to at least above 2.25% to truly threaten the great bond bull market, but the rise in yields this past week has certainly piqued our interest. What would get the bears more excited would be hints from the Federal Reserve that rate hikes are back on the table. 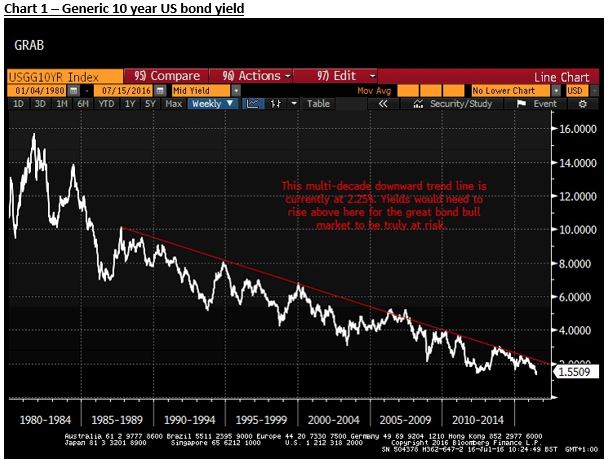 Getting back to Japan, we know that the authorities there are extremely unhappy with the recent marked strength in the Yen. Now that it appears that the monetary and fiscal policymakers are willing to unleash yet another round of whatever it takes to boost inflation, we see the conditions very much in place for another round of Yen weakness. Chart 2 below shows how the USD/JPY exchange rate, having fallen by over 20% in recent months (a falling rate is Dollar weakness and Yen strength), is finding support around the 100 area. We look for the USD/JPY exchange rate to at least stabilise around here, and most likely start to move higher again. 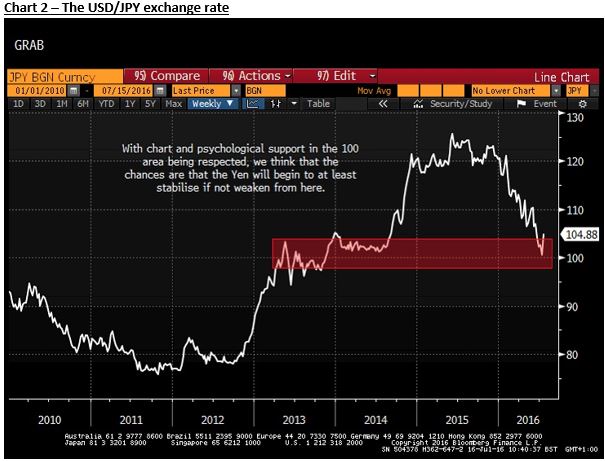 In a financial world that seems to make less and less sense (to us at least), we see signs that the fundamental drivers are falling into place to support higher Government bond yields and a weaker Japanese Yen. To be clear, the current market conditions do not fully support these views, but the action of the last week or so has absolutely piqued our interest. In fact, we hope to gain a little more clarity in the next couple of weeks as central bank meetings conclude in Europe, the US and Japan before the end of the month. When trends of this magnitude turn, it’s like the super tanker analogy; it takes an awfully long time. That said, for the time being, we will be looking to be bearish of both Government bonds and the Japanese yen.