Most investors like to think of financial market risks as measured through a normal distribution. In reality, we know that it is not the case. However, how we incorporate and discuss fat-tails is not always clear. One thing that is clear is that fat-tails can be created when there is a mixed distribution or a combination of distributions that represent different regimes. A simple example will be the mixing of growth versus recession or good versus bad states of the world. This has been our theme for 2017 with a new year post. The potential for two different economic regimes will create fat tails in the return distribution of financial assets.

We have continued with our theme because with a new president many key policy issues will not just be up for discussion but will become potential reality. We already believe that growth in the US is expected to be stronger. The Obama administration gave the new president the best gift possible – a growing economy that seems to be improving. Nevertheless, the foundation for this growth is shaky.

The forward-looking issue is whether new policies can sustain or improve this growth and not detract through creating new risks and uncertainty. There is no doubt that there are economic pockets that need work, and there is the fear of the US economy losing steam after eight years and a global economy that still seems weak albeit expected to improve.

The tail risk problem is that the better growth on the surface still shows an economic foundation that could easily move to stagnation. Less than a year ago, the talk in most financial papers was still the Lawrence Summers meme on secular stagnation. His argument still holds even with his more nuanced views in editorials.

Our view is that the bimodal world requires two asset allocation actions. Continued diversification and exposure to strategies that can take advantage of fat tails through positive convexity. While many have suggested that lower intra-market correlations make for a stock pickers world, the potential macro extremes will still drive performance. This is why we have used the asset allocation checklist of BAG – Beta, Alpha, and Gamma. 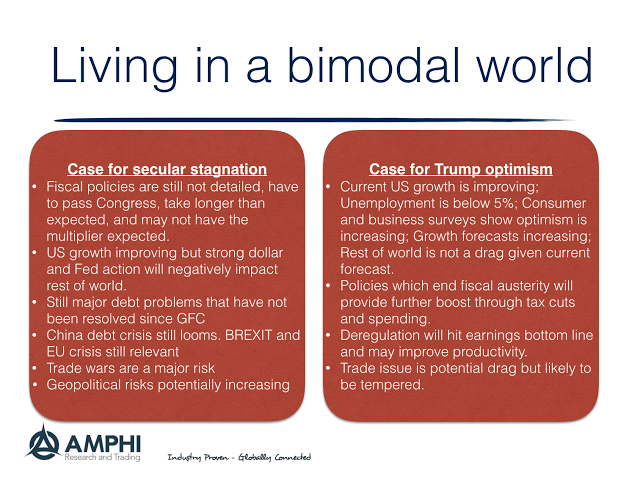