“When as a young and unknown man I started to be successful I was referred to as a gambler. My operations increased in scope. Then  I was a speculator. The sphere of my activities continued to expand and presently I was known as a banker. Actually I had been doing the same thing all the time.”

Banking is respectable speculation or at least it was up until the Great Financial Crisis, so there is a good question of who should bear the risk of this activity. There is little question that shareholders should take this risk, but even under the current system there will be shifting to governments. The risks are increasing if rates are going higher and this may not be good for any bank stakeholders. The Fed, when it lowers rates, helps banks through reducing their cost of funds and increasing the value of their loan book and assets.

Now we are in a different period. Rates are headed higher with the cost of funds increasing and the value of loan books and fixed income assets declining. This calls for new speculation by banks as they adjust to this new tightening regime. How does the bank get out of the way of rising rates and keep the firm profitable? This form of speculation occurs even if it is called hedging by risk managers.

Make no mistake, this activity involves speculation through views on rates. This bank speculation is not a matter of opinion or perspective. Positions, in a lower margin environment, have to be taken. Banks are not usually fully hedged, so rising rates can have a negative effect, or it can offer new opportunities to increase loan rates while keeping a lid on deposit rates. Margins will change.

The euphoria of potential deregulation has driven the financials sector higher, but now there will be the hard work of determining which banks will be better at coping with potential rate increases. 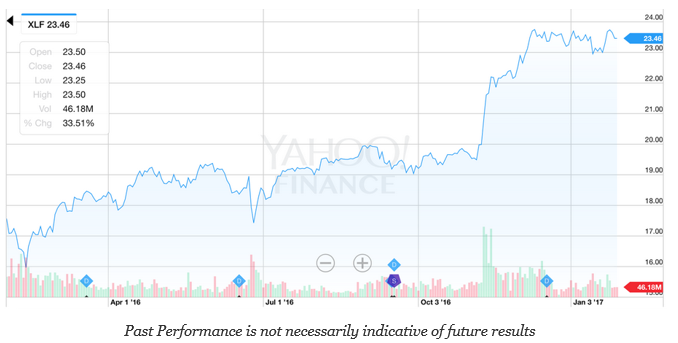