“March Hare: …Then you should say what you mean.

Hatter: Not the same thing a bit! Why, you might just as well say that, ‘I see what I eat’ is the same as ‘I eat what I see’!

The Dormouse: You might just as well say, that “I breathe when I sleep” is the same thing as “I sleep when I breathe”! – Lewis Carroll’s  “Alice In Wonderland”

“If you cannot say what you mean, your majesty, you will never mean what you say and a gentleman should always mean what he says.” – Reginald Fleming Johnston (The Last Emperor)

I meant what I said and I said what I meant. An elephant’s faithful one-hundred percent.  – Dr. Seuss book “Horton Hears a Who”.

When managers or investors use language, there can be a significant amount of uncertainty in what meant. There is little precision in language so quantitative analysis provides more details in the highly competitive money management field.

This issue of imprecise language was first studied by the CIA analyst Sherman Kent who identified the problem in the reporting by other analysts. If someone says that an event is “likely” what does that really mean? Sloppy language leads to sloppy thinking. We have discussed this issue in the past in our posts Sherman Kent – the godfather of precision in forecasting language and What does failed intelligence tell us about investing, but we came across an enhanced analysis based on survey work. A large number of people were asked to provide probabilities to different word phrases. This information was translated into these beautiful graphs. See these posts for more information on how the graphs were constructed. Look at the high degree of uncertainty associated with these phrases. Be warned; someone who tells you that something is unlikely will still have a median of 20% chance of occurring. A probable outcome has only a 70% median with a range of plus or minus 20%. 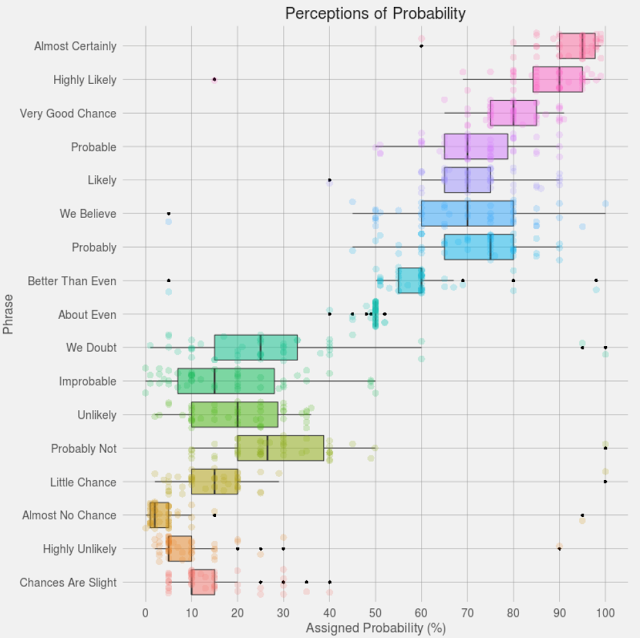 The same problem applies with perception of numbers. A lot could mean anything from 10 to 100. Scores could be close to 100 but range from less than 10 to 100,000. The operative phrase is “watch your language”. 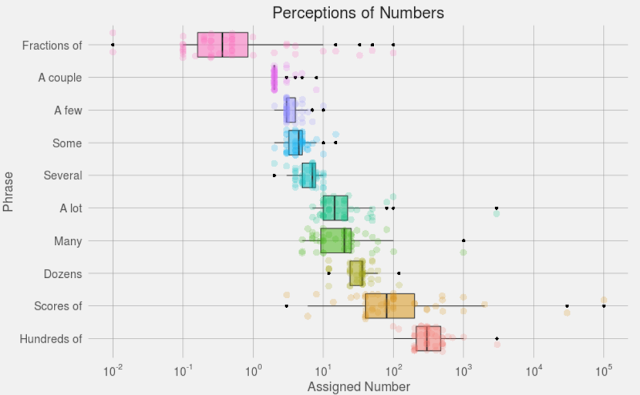 How many times have you sat in on an investment meeting only to have those around the table use “squishy” language which has no meaning? (I have been to dozens.) It is a fine way of avoiding accountability. Of course, numbers can be used to provide a false sense of certitude, but given a choice; I will take the precision of a number. The number can be checked and verified. The lesson from “super forecasters” is that the process of adding precision to a forecast improves the forecast.