The Financial Times suggested that there is a “Dollar Doom Loop” facing the Fed. Perhaps a little dramatic with the “doom loop” analogy, but not as bad as “death spirals” or “Wile E. Coyote moments”, this story sets the tone for what may be one of the biggest problems not being looked at by most investors. Risk is really volatility or price moves times the exposure to the price change. As the dollar denominated global debt exposure increases, there will be more global risk for any change in rates.

As a reserve currency and as the currency of choice for much of the credit growth since the Financial Crisis, the dollar and its price for borrowing is critical to financial markets. The price of dollar credit is not like the price of credit in home currencies. Debt in a home currency will not have any foreign exchange risk, but dollar debt issued by foreigners will be negatively affected through two channels by Fed QT actions. Raising rates will affect the price paid for refinancing, and a rising dollar affects the price at which the liabilities must be paid.

The doom loop occurs when US rates rise and the dollar appreciates on capital inflows that are attracted by the higher rates. Now you have the cost of credit increasing and the principal has to be paid with more expensive dollars. Of course, if the dollar financing is associated with trade or payments in dollars there is a smaller problem, but micro loan data does not suggest this to be the case. These dollar liabilities will have to be paid with more expensive dollars. 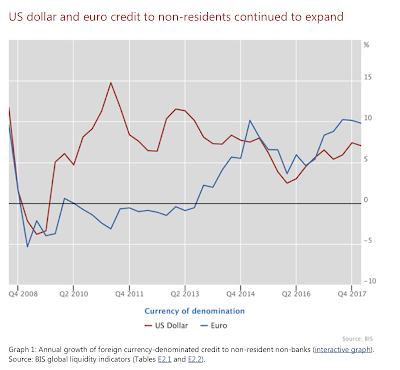 The current size of the dollar debt is mammoth, and barely reversed in 2008. The size of dollar credit outstanding for the world and EME has almost doubled since the Financial Crisis. This does not look like a world that is afraid of credit. Of course, assets and wealth have also been increasing but any asset reversal will create a balance sheet problem. 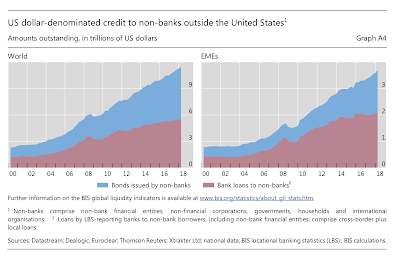 The dollar denominated credit to non-banks in EME has skyrocketed across most regions except emerging Europe. Most of the credit is in China which is especially problematic. With the dollar increasing and US rates increasing, it should not be surprising that EM equities have declined. The combination of trade wars, which will slow EM growth, with large dollar exposure makes for a toxic financial mix that is not found in developed countries.

We don’t want to be doomsayers, nor do we want to scale the wall of worry, but if risk need to focus on size of exposure as well as volatility then greater attention to credit risk is prudent.