The 1990’s were filled with emerging market failures through “sudden stops” – a sharp reversal of capital flows which led to declines in currencies, large increases in local interest rates, and sharp declines in equity market. Countries hit a funding wall.

The capital flow reversal is driven by the simple identity that a current account deficit represent an imbalance where saving is less than investment. That is, S – I = CA. If the savings and investment imbalance associated with a currency account deficit cannot be financed, there is a sudden stop or disruption in local capital markets as the economy adjusts. For equilibrium to be restored, there will be a sharp and immediate change in the savings investment relationship which will show-up in asset and currency prices. These sudden stops are often associated with either a banking or credit crisis.

Emerging market central banks added reserves in the post-Asian crisis in order to protect against these sudden stops.  Call it a foreign exchange cushion. These policies of building reserves have generally worked except for the Financial Crisis period, yet it seems as though we are in a new EM sudden stop period. This new environment generates heightened contagion risks. Any country that is running a current account deficit larger than normal or funded through short-term debt is subject to heightened review. The chance of a funding run on the bank has increased which makes all current account deficit countries at higher risk. 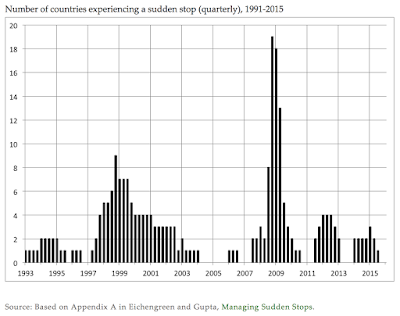 A good primer on sudden stops can be found on the VOX CEPR Policy Portal called “Sudden Stops: A Primer on Balance-of-Payments Crises”. The characteristics that will place a current at risk includes, free capital flow, short-term funding, a reliance on foreign currency debt, a small tradable sector, and a fixed or tight exchange rate. If a country has an excessively levered banking sector with foreign debt, it will be suspect.

All you have to look at Turkey and Argentina to see what the extreme financial and economic risks that exist when a sudden stop occurs. The result has been significant increases in interest rates, capital controls, limited liquidity, and a decline in equity prices. It disrupts the finances for each country hit with a sudden stop, but the uncertainty threat to other countries is also real. 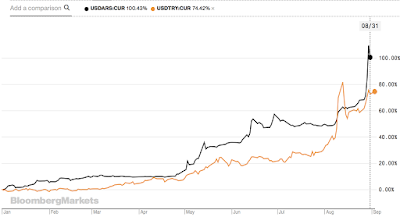 When in doubt or more precisely when in uncertainty, safety-first dictates closing positions in risky countries and shift to safe assets. If a country is running a current account deficit, the mantra for many investors will be cut the risk. We know what has happened to the countries on the bottom of this list. 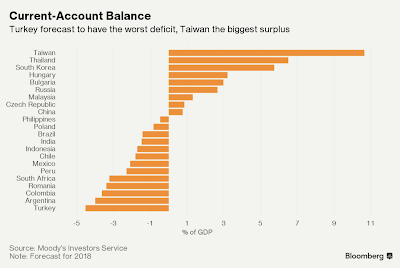