NIRP is not a textbook theory and prior to recent years has never been used by central bankers or their pre-modern day equivalent. Negative interest rates are being increasingly prescribed by central bankers as a cure for slow growth and deflationary pressures. Consider that the European Union, Japan, Sweden, Switzerland, and Denmark have all engaged in a NIRP and British and U.S. central bankers have mentioned it as a possibility.

What are negative interest rates?

By depositing funds in a bank, one foregoes consumption today to save for tomorrow.  A deposit is effectively a loan to the bank which can be withdrawn at a later date. Banks typically pay interest on deposits to compensate for the time value of money and the potential default risk associated with the bank. Banks seek deposits because the resulting funds can be lent at higher rates to others, thus generating net income for the bank. This arrangement has defined banking since its earliest roots in ancient Greece nearly 4000 years ago.

Negative interest rates, however, are quite a different arrangement. They essentially ignore or negate the time value of money and any default risk associated with the entity employing negative rates. For example, imagine depositing $100 into your bank account only to find out that you have $98 left when you go to withdraw it in a year or two. Not only were you not compensated for the time value of money and the default risk, you actually paid the bank to make these sacrifices.

To consider why central banks are promoting this policy we need to understand their goals and the policy tools at their disposal to achieve them. Most central banks are entrusted with the important role of managing their nation’s monetary policy to foster strong economic growth, full employment and moderate inflation. To accomplish this feat, many central banks adjust short-term interest rates to influence borrowing and ultimately consumption. 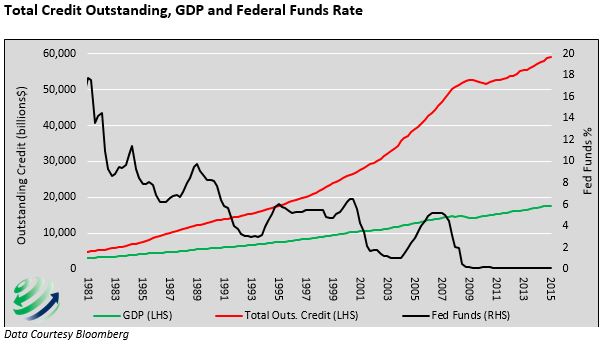 The sharp increase in total credit outstanding or “debt”, relative to the increase in GDP is a reflection of the rising leverage driving economic activity. In the 1980’s it took roughly $1.50 of debt to generate $1.00 of output. Today the economy needs $5.00 of debt to generate the same $1.00 of output. It is important to consider that GDP, a primary measure of economic activity, represents a nation’s ability to service debt.  Borrowing for long periods of time in amounts greater than your ability to service it with economic activity, as shown above, is only possible with low interest rates or when there are very gullible lenders.

Since 1995, U.S. Treasury debt outstanding has quadrupled, however the total annual interest expense paid by the Treasury remains roughly the same. Declining interest rates make refinancing existing debt with new debt cheaper, and prolongs the borrower’s ability to service that debt, but there is a limit to how effective such a policy can be.  It seems plausible that as debt loads expand and most nations approach zero or even negative rates, that limit is being reached.

Negative interest rates are a tax. Not a traditional tax paid to the government, but an expense paid, nonetheless on savings. Years of policy designed to encourage spending and discourage savings has likely reached the end game; the point where those exhibiting prudence are punished. As we mentioned in the prior article, a paradigm shift may be in the making.

For investors, the implications are immense. Those seeking alternative investment strategies and preparing for the consequences of negative interest rates may likely come out the winners when all is said and done.