Five of the last six Summers have seen European troubles bubbling to the surface. It appears that this year, Europe is again struggling to contain some wildfires that have just taken hold. Indeed, after four months of relative calm in financial markets, these European problems could well be the events that shatter the global peace.

The most obvious and immediate European problem is the UK’s Brexit vote on 23rd June, and momentum has clearly swung away from the remain camp in the last two weeks. What was seen as only a minor risk for financial markets has quickly become a huge potential risk and prices have begun to adjust. In our opinion, this is not just an issue of migration but a problem of the average man on the street simply does not feel that their lives have improved materially since the Global Financial Crisis. There are a huge number of voters who feel completely disaffected and simply want change. This is not an issue unique to the UK. Huge numbers across Europe and the US are in the same boat and the risk of a series of anti-establishment votes in the next year or so is growing.

Aside from the Brexit vote, it is interesting to note that a recent Pew Research poll showed that 61% of French voters hold an unfavourable view towards the EU, compared to only 48% in the UK. This comes only a couple of days after the anti-establishment 5 star movement in Italy polled extremely well in first round mayoral elections, Rome in particular. In fact, although there have to be concerns about France, Greece and Portugal, it is Italy that is most likely to upset the political status quo. PM Renzi has proposed a referendum for October in which the public are basically being asked to back the Government’s proposals on structural reform. Renzi has promised to step down if he loses the vote, and with the current strong polling for the 5 star movement and the deep seated scepticism over structural reforms, this referendum could become very important for the EU project.

It has to be said that being an expert on European politics is a fine art nowadays, and the ebbing and flowing will continue over the next few months, that much we can be sure of. But what does it mean for markets?

Here, we have to bring in the ECB and what’s happening with the European banks. For years, we have questioned the efficacy of the extremely unorthodox policies of Central Banks, and it would appear that the huge QE programme and negative interest rates being pursued by the ECB are really squeezing European Banks. Certainly, investors seem to be in agreement with this, as European bank shares are closing in on multi-year lows and close to testing the crisis lows seen in 2011/12.

This is potentially a major issue as bank lending to the real economy is closely correlated with their share price performance as can be seen in chart 1 below. It would appear that the ECB are either unable to generate a sustainable improvement in the way banks support economic performance or are in fact hampering this very important dynamic. 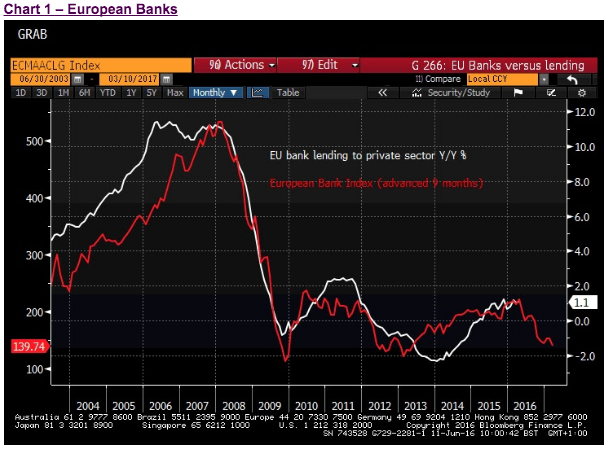 If the correlation indicated in this chart holds, bank lending in Europe is set to start declining again. It has always struck us that despite record low interest rates, the private sector is not increasing borrowing by that much. This is probably a combination of demographic forces and businesses simply not seeing good long term investment opportunities. Clearly, an escalation in EU problems as highlighted above will do little to improve business and household confidence. Furthermore, the ECB has recently been keen to point that despite the current low/negative interest rate environment, banks will have benefited from making capital gains on the Government bonds they hold. That brings us on to the European Government Bond market.

In this world of such unorthodox central bank policies, we’re beginning to wonder what constitutes a bond market bubble. However, we know that a milestone was reached in the last few days. As seen in chart 2 below, the yield on all outstanding German Government bonds has fallen into negative territory. Although yields can fall further, this is simply insane. At the risk of pointing out the obvious, what this means is that collectively all holders of German Government bonds are guaranteed to lose money from here until all current outstanding bonds mature. Yes, a few lucky traders may profit from short term trading, but nominal losses are now guaranteed and inflation adjusted losses will be much larger. 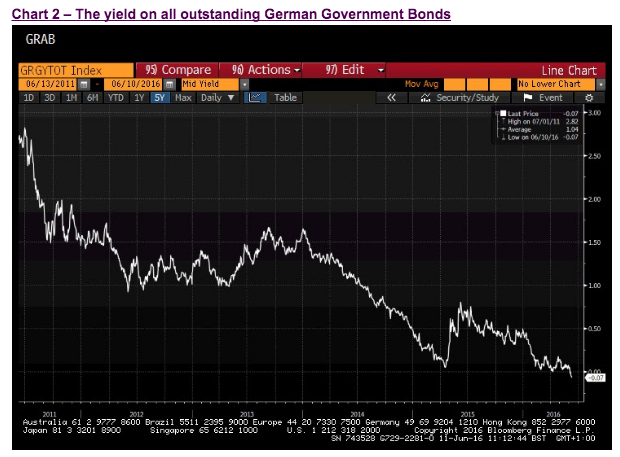 With 2 year and 5 year German bonds yielding minus 0.54% and minus 0.43% respectively, and the 10 year bond trading down to a yield of only 0.01% at one point on Friday, clearly the negative interest rates and QE is distorting the market, and as claimed above, hurting the banks and arguably the economy. So, what does the ECB do? Maintain current policies and hope the outcome changes for the better? Cut rates further into negative territory and increase QE in the hope that more extraordinary stimulus will suddenly change the outcome? Or, do they admit defeat, and wind down QE and begin to raise rates back into positive territory?

It appears that none of these options are particularly palatable. Doing nothing or more will not help the banks and maybe not the economy, but raising interest rates may well pop the bond bubble – which will end any more capital gains for banks which was perhaps one of the few things going right for them in recent months. Even if the ECB stays on the same course, who’s to say that the political risk does start to impact the periphery bond markets. With two year bond yields negative in most EZ countries, and ten year yields at or near all-time lows in France, Spain and Italy, there is no political premium priced in at all.

From a different perspective, what happens if the message from the bond market is right, i.e. deflation? What happens if Europe is on course for Japanification (in fact, the Italian economy has underperformed Japan on some measures over the last two decades!). Well, then we think that the increasingly anti-establishment feeling noted above will only worsen, and at some point the voters of a EZ member will vote for decisive change, which will see bond prices come under significant pressure throughout most of the EZ.

As for equity prices, as can be seen in chart 3 below, these have simply not been able to benefit from either negative interest rate or QE. 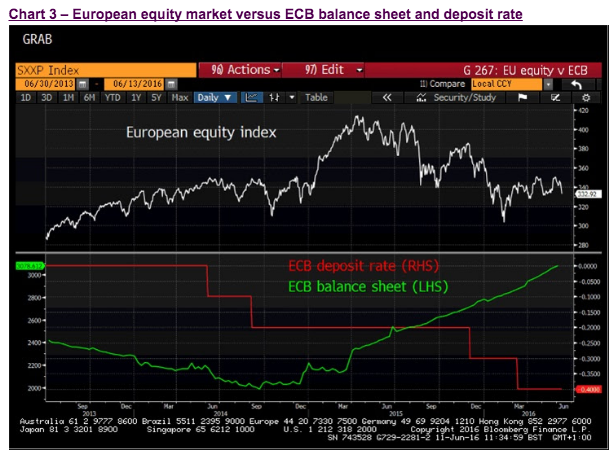 All of the above indicates to us that the status quo that has seen European asset prices (bond in particular) perform well since the nadir in February could easily be shattered at any time. Voters are increasingly angry and are close to demanding big changes. However, the ruling elite in Brussels and Frankfurt are desperate to maintain the status quo. In this increasingly fragile environment, is it any wonder that investors are shunning European equities and chasing yield in both Government bonds and corporate bonds (where a massive buyer emerged this week – the ECB – will this really end well?).

Disclaimer: Past performance is not necessarily indicative of future results. The risk of loss in trading commodity futures, options, and foreign exchange (“forex”) is substantial.

We have been tentatively positioning our funds in the last month or so for an increase in risk premiums in European assets. We have been long 10 year German bonds versus a short in Italian bonds for a couple of months and a few weeks ago we bought long dated put options on the Euro versus the US Dollar. We believe that it is now time to increase the size of our trades that will benefit from rising risk premium across European assets. Because we believe European bonds are in a bubble and that spreads versus German bonds will widen as political risk rises. As such, we have now sold short 10 year Italian and French Government bonds. We have also introduced a small short position in European equities.

In terms of the bigger investment playing field, rising risks in Europe will likely impact Emerging Markets. We have been selling EM currencies against the US Dollar and have introduced a small short EM equity exposure as well. If we are proved correct in taking these bearish positions, the big question is will US equities also succumb to bearish global trends. If they do, then frankly the investment environment will become a lot more difficult than many expect, and US recession risks will rise rapidly. However, in the next few weeks, our attention is focused on Europe and Emerging Markets, where the status quo appears to be very fragile indeed.