We have been meaning to write an in depth report on central bank policies for some time and the market responses to recent BoJ policy decisions as well as the Fed meeting and press conference this week have nudged us to make a start. Below are some initial thoughts on how good central banks are in their forecasts and where they may take us in the future. We don’t mean this to be a rant, but it’s hard to discuss central banking politely when they have been so ineffective, when they refuse to accept they have been incorrect and they refuse to fully acknowledge the full unintended consequences of their hugely experimental policies.

Let’s start with the Fed. Last week, as expected on the eve of the two day meeting, the Fed left policies unchanged. During the post meeting press conference, Chair Yellen came across to us (and a number of others judging by commentaries we have read) as confused and frankly lacking in any conviction over her forecasts. We see her more and more as an academic (surrounded by many other academics) who understands that hers is a dismal science and whose own models are turning out to be very ineffective.

Like most mainstream and academic economists, the Fed’s forecasts for economic growth post the financial crisis have been way too optimistic. As growth remains stubbornly low, the Fed’s interest rate projections continue to ratchet lower, as can be seen in the chart below. What seems to be really exercising the committee’s members is the longer term natural rate which they see as having collapsed from 4% to 3% in just over two years. The natural rate simply does not change that quickly (certainly outside of crisis), and so this is the Fed playing some catch up as their earlier forecasts we just so wrong. In fact, Chair Yellen seems to be falling into the secular stagnation camp, and it appears likely to us that the Fed will continue to lower their forecasts as reality dawns on them. 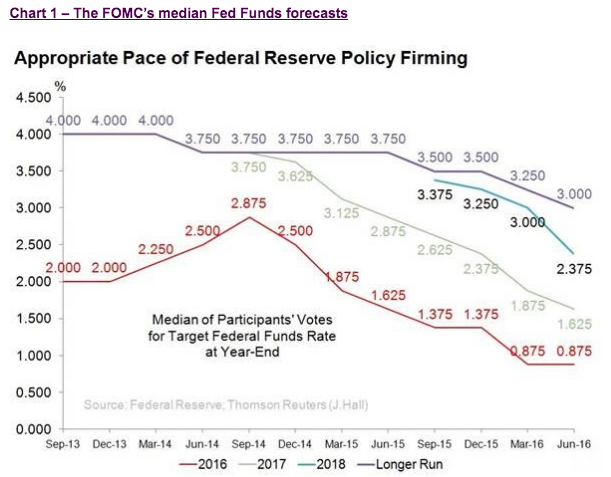 What the Fed will never forecast is a recession, and yet we all know that a recession will occur at some point. If one starts in the next 12 months, which we believe is increasingly likely, then the Fed will have very little fire power to help, and will have to cut rates to zero (or heaven forbid even negative) and talk of more money printing will be everywhere. How can anyone say that this would be a positive outcome for the Fed and their credibility?

Moving onto the Japan where the Central Bank is like a deer caught in the headlights. The one thing they don’t want is aggressive Yen strength, and yet that is exactly what they are getting whether they ease policy further as they did at the end of January, or they do nothing as they did last week. Governor Kuroda (who like Yellen has never worked in the private sector) has been forecasting economic recovery and 2% inflation since he took over in March 2013. This is simply not happening.

Over three years later, inflation excluding the effect of tax changes has never reached 2% and is currently at just 0.7%. QE has boosted the Bank of Japan’s balance sheet to over 80% of GDP and it will be at 100% in just over a year, and interest rates are negative as far as the eye can see. Yet it is probable that more stimulus will be thrown at the problem after elections next month. We are not sure what Kuroda hopes to gain from extra stimulus, but we can say for sure that the unintended consequences are now beginning to show themselves. The Bank of Japan is probably the first central bank to engage in helicopter money in some form; an experiment that is unlikely to be viewed well by historians, in our opinion.

You can probably see where we are going in this discussion. Central bank forecasts in recent years have been lamentable and they have engaged in experimental policies that in other scientific fields would have been stopped years ago, if they were allowed at all. Their policies are simply not working in the way they told us they would, and even they will admit that there are large unintended consequences that they hope not to see (well, at least not on their watch!).

Central bank support for financial markets works so long as they have credibility, and this credibility is being constantly eroded. There will come a point when the market simply sticks two fingers up at central bankers, and valuations will retreat back to historically normal levels, possibly with some overshoot into undervalued territory on the way. None of us can be certain when this time will come, and it’s likely to be a process or reckoning rather than a single event.

But we do believe it will be seen as central bankers will never change. They are mostly academics (Golmanites aside) sitting in their ivory towers fussing over models that have never predicted a single recession. These elites can never admit that their past policies were ever wrong, and they will simply keep pursuing their failing experiments until someone either stops them or the markets revolt. Either way, the eventual outcome will be messy for economists and painful for investors and real people in the real economy.