While an investment in managed futures can help enhance returns and reduce risk, it can also do just the opposite and in fact result in further losses in a portfolio. In addition, studies conducted of managed futures as a whole may not be indicative of the performance of any individual CTA. The results of studies conducted in the past may not be indicative of current time periods. Managed futures indices do not represent the entire universe of all CTAs. Individuals cannot invest in the index itself. Actual rates of return may be significantly different and more volatile than those of the index. 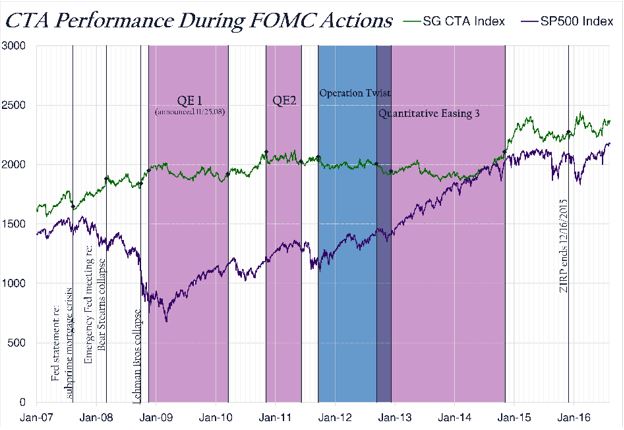 In the midst of any foggy economic phenomenon, it’s difficult for an industry to really assess how it’s being affected. But with time comes clarity, and it’s now possible to look back on the past eight years of Fed policy and draw broad conclusions about how Quantitative Easing actions created headwinds for investors in the managed futures space. Crucially, these conclusions give us a reason to feel optimistic looking toward 2017 and the return to a world of abundant, varied trading opportunities.

Ultra-low interest rates and quantitative easing that aimed to stabilize markets have indeed been great for stocks, bonds, real estate, and any asset class that benefits from stability. Managed futures, however, thrives not on stability, but on volatility and the opportunities it creates. That’s why CTAs may be excited to anticipate future interest rate rises from the Fed, and to see enough economic health in the U.S. to prevent any further temptation toward another QE program.

The Federal Open Markets Committee set its target fed funds rate at the 0.00% to 0.25% range for a record-breaking stretch of seven years after dropping to that level in December 2008. The ‘zero interest rate policy’ (ZIRP) finally ended eight months ago in December 2015 with the smallest of all possible bumps up to the 0.25% to 0.50% range.

So far in 2016, there has been a lot of guessing and second-guessing through each month, as investors have tried to anticipate the next bump in interest rates targeted by the Fed. Given the Fed’s dual mandate of maximizing employment and managing price inflation, the consensus going toward the end of the year seems to express confidence that these economic indicators are looking healthy enough for the Fed to consider an interest rate rise either in December or early next year. And with enough confidence for higher interest rates, there should also enough confidence to hopefully keep Quantitative Easing hidden away on a back shelf alongside other historical novelties like the gold standard or the WPA.

We say ‘hopefully,’ because a look at the relative performances of the S&P 500 Index and the Soc Gen CTA Index demonstrates how the managed futures industry has been held back by the Fed’s efforts to stabilize and pump up the broader stock market. 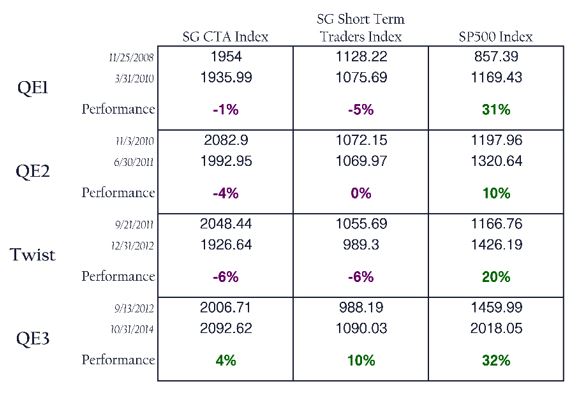 To be fair, the QE periods show the policy was impressively effective at bolstering the broad market. The S&P 500 made gains of more than 10 percent during each of the three timeframes, most notably rising from 1,459.99 points to 2018.05 points (a gain of 32%) during QE3 that lasted from September 2012 through October 2014. Operation Twist, too, led to an impressive 20% rise in the S&P 500.

CTAs, on the other hand, were stifled by the relatively low market volatility. When all market participants know that the economy is propped up on an interest rate of 0%, and everybody’s been told that the interest rate isn’t going anywhere anytime soon, there’s just not enough uncertainty to make traders active on both sides of any bid-ask transaction. Little volatility means little movement means little opportunity for profits, especially in short-term or pattern-based trading strategies. So the managed futures sector received no apparent benefit from the Fed’s actions, with the overall SG CTA Index basically stuck in place during QE1, losing 4% during QE2, dropping 6% during Operation Twist, and gaining a meager 4% during QE3. Parsing out the Soc Gen Short Term Traders Index shows how that specific sector of the managed futures space was challenged – it dropped 5% during QE1, was stagnant during QE2, dropped 6% during Operation Twist, and managed to gain 10% during QE3.

In a post-QE world, the opportunities for success in managed futures are likely to increase, with all markets more capable of moving freely. Volatility is like the base stock of a soup, from which managed futures strategies and returns are derived.

The good news is that the soup is likely to get tastier in coming months, now that market movement is once again going to be allowed to flourish in its natural state. Interest rates in the U.S. are more likely to go up than down, possibly as soon as this December, and even during the anticipation leading up to that timeframe, the smart money will be seeking out alternative asset classes that will thrive amid volatility. Hunkering down in low-risk asset classes and meekly accepting the government-bolstered whole-market growth – that’s no longer the prescribed strategy for optimized return. With confidence that we’ve put the QE phenomenon firmly behind us, an investor can predict that the future will be a different sort of timeframe. The focus will be on allocating investments into areas with the best chance of competitive success. Managed futures, with their flexibility, active trading, and focus on diverse markets and diverse trading strategies, are expected to thrive in the coming era.