There is no doubt that big swings in the value of the US Dollar have a big impact on global economic growth and also financial markets performances. Between June 2014 and January 2016, as the Dollar rose by over 20%, global equity markets struggled (Emerging Markets suffering the most), commodity prices plunged and deflationary concerns moved front and center. After the Dollar topped in late January, everything has turned around. The Dollar has traded sideways, financial markets have performed pretty well overall and economic concerns have abated. Although it cannot all be about the Dollar, we need to recognize that the Dollar is extremely important for both financial markets and the global economy.

So, it is with growing interest that we see momentum gaining in the US Dollar. In chart 1 below, we show the US Broad Trade Weighted Index which has gained nearly 3% in the last two months and is trading at its highest in nearly eight months. Although this recent Dollar strength may turn out to be nothing more than short term “noise” within a larger consolidation, there are reasons to believe that further Dollar strength lies ahead.
Chart 1 – The US Dollar Broad Trade Weighted Index 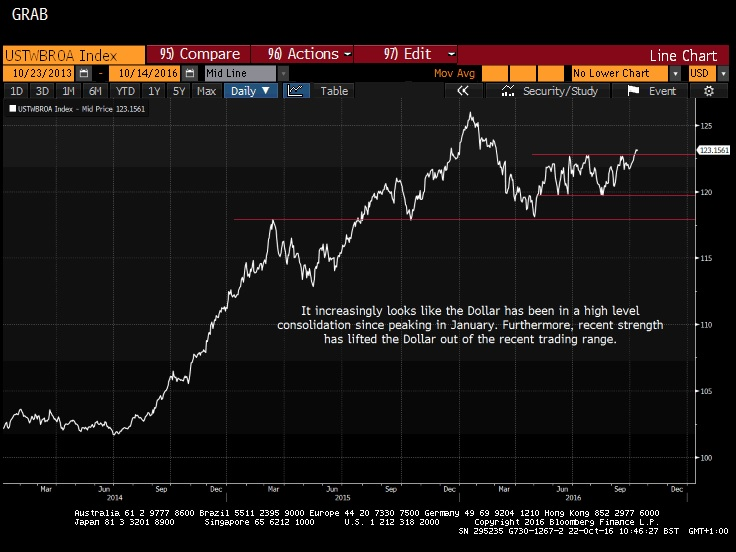 From a central bank divergence standpoint, the Dollar appears to be attractive. The Fed continue to guide market expectations towards a gradual normalisation of policy, whereas the Bank of Japan and European Central Bank remain in full on emergency mode and other central banks continue to discuss more easing. Although policy divergence is not the only currency driver, it should remain important.

Another development that is beginning to capture some headlines is the persistent weakness in the Chinese Yuan. Chart 2 below shows the US Dollar versus Chinese Yuan exchange rate. Within a larger Dollar bull market, gains appear to be accelerating in the last couple of weeks. In August 2015 and January 2016, accelerating Dollar gains led to losses and higher volatility across global risk assets.
Chart 2 – The US Dollar/Chinese Yuan Exchange Rate 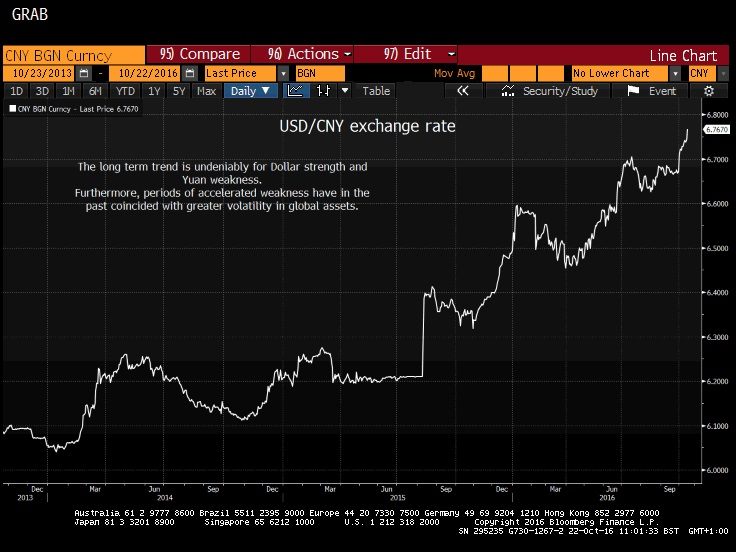 Understanding Chinese currency policy is not always straight forward, however, the underlying story here is one of continuing capital outflows. Chart 3 below (courtesy of Goldman Sachs) shows Chinese capital flows. As can be seen, although capital began to leak out of China in late 2014, there was a marked increase Summer 2015, coinciding with the mini devaluation, and again around the turn of the year. It would appear that capital outflows are increasing again which we believe is a negative for the Yuan, and potentially a bearish portent for global risk assets.
Chart 3 – China Capital Flows 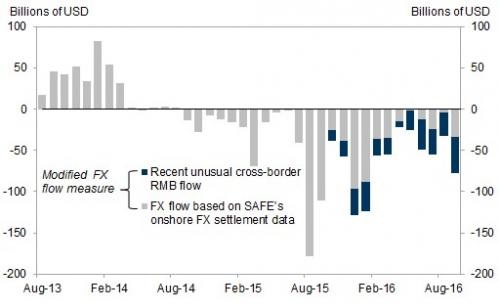 Now, there is no doubt that Dollar bulls have been disappointed in recent months as the Fed actively moved away from the four rate rises promised in January by vice chair Stanley Fischer. However, the Dollar strength in recent weeks has the feel of something bigger developing. One asset that is not confirming our thesis however is the price of oil. Chart four below shows the performance of the Dollar and WTI Oil. The correlation over the last three years is clear, and future US Dollar strength should surely impact the price of oil.
Chart 4 – The US Dollar v. the Oil price 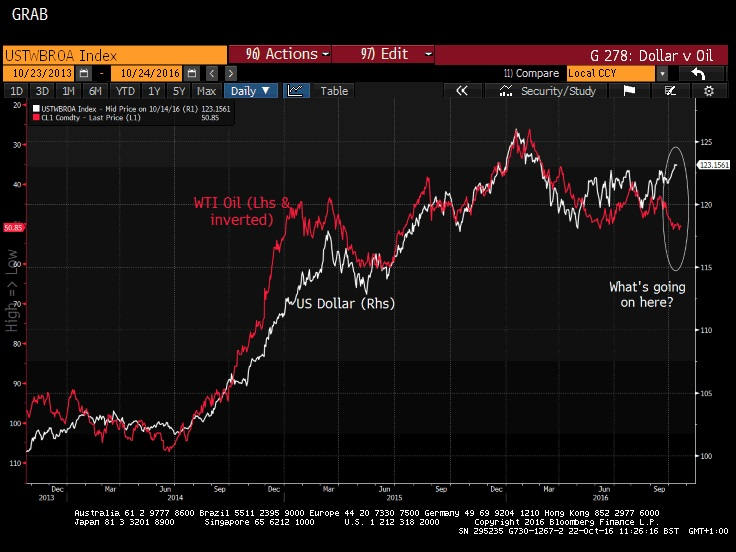 However, the correlation has gone awry in recent weeks. The prospect of some sort of deal at the upcoming OPEC meeting is supporting the oil price. However, with Opec output continuing to rise and global inventories still way above average, we suspect a freeze will simply not be enough. If we are right on this point, and the price of oil begins to decline back towards $40 this will have quite large consequences for global assets and for the global economy (there will be winners and losers but psychology is still that lower oil is deflationary).

In such a scenario, Emerging Markets, especially those reliant on commodities could suffer and hot capital would likely switch to actively selling EM assets. Commodities generally would lose value which could easily weigh on global equity markets. If the oil price were to fall far enough, then the bond market could well move yields lower despite the potential for higher inflation in the next few months.
So to try and wrap up this week. There remain a number of important macro factors that could influence markets, however a number of them just don’t seem to matter in a world of extraordinary Central Bank largesse. What is really grabbing our attention because it could be very important is the recent strength in the US Dollar. Yes, there will be corrections along the way, but we do believe that the recent Dollar gains are the start of something bigger. Recent gains are occurring despite no dramatic shift in central banking policies, and illustrate that there is a growing shortage of Dollars in the global system, and that growing shortage could easily be the oil that lubricates any future Dollar strength.

Global investors and policymakers have learned the hard way in recent quarters how important the Dollar really is. Another period of Dollar strength would be damaging to both financial markets and the global economy. Amongst many important factors that investors need to be aware of, the Dollar is the most important, and could well be signalling an impending end to the recent calm that has prevailed.