While an investment in managed futures can help enhance returns and reduce risk, it can also do just the opposite and in fact result in further losses in a portfolio. In addition, studies conducted of managed futures as a whole may not be indicative of the performance of any individual CTA. The results of studies conducted in the past may not be indicative of current time periods. Managed futures indices such as the Barclay CTA Index do not represent the entire universe of all CTAs. Individuals cannot invest in the index itself. Actual rates of return may be significantly different and more volatile than those of the index.

Since the post Brexit plunge in bond yields, we have been becoming more negative on bonds. Along with virtually everyone, except central bankers, we have been banging the drum of how insane negative bond yields are. However, with many institutional investors required to hold Government bonds due to regulatory and capital requirements, and central bank’s QE exceeding global Government bond supply, it was almost understandable how bond yields could remain in sub-zero terrain. Understandable yes, but that did not make them good investments!

The policy narrative has changed post Brexit, with more talk of big fiscal stimulus programmes and both Mark Carney and Janet Yellen talking about allowing an inflation overshoot and letting the economy run hot for a while. This policy combination alongside the record low yield environment could turn very toxic for bond investors, which in turn should have negative consequences for equity markets.

With only one trading day left, October has been the worst month for global bonds in over three years, with a loss of 2.9% (as measured by the Bloomberg Barclays Global Aggregate Bond Index). The 10 year German government bond yield rose by 16 basis points last week which from 0.00% is a large move. Chart 1 below shows the yield on the generic German 10 year bond, and there are a few interesting things to note. First, yields have broken decisively above a pivot area that has been both support and resistance in recent months, Second, having collapsed into negative territory on the Brexit vote (when CBs yet again acted to save the world), yields are now back above their pre Brexit level which we believe is quite a psychological event. However, to be more bullish on yields (bearish on bonds), we need to see the dominant downtrend broken. It would appear that it is crunch time in the German (and therefore European) bond market. 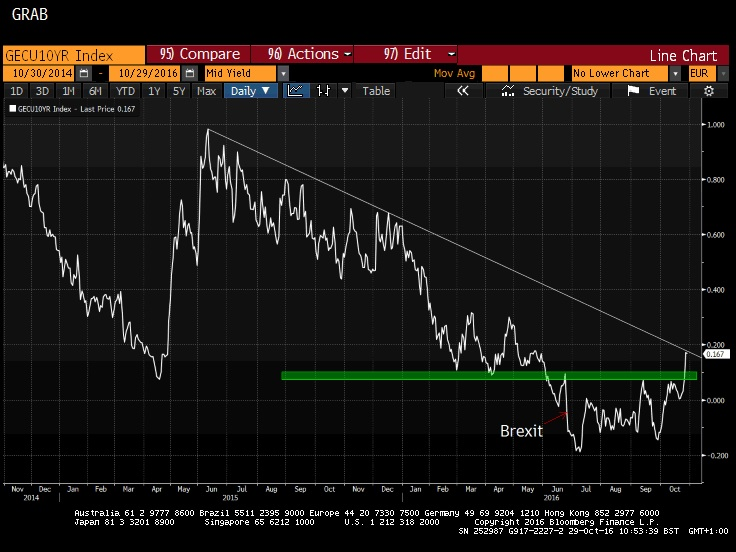 To consider the bullish argument for bonds for a moment. First, policymakers have actually been trying to run the economy hot for years now, and have failed to get above stall speed. Second, QE will continue to be extremely large, although we do believe the Bank of Japan will struggle to achieve Yen80 trillion a year of QE in their brave new world of yield curve control, and we do believe the ECB will reduce QE as well, perhaps sooner rather than later. Third, the Fed is set to raise rates, which along with rising market rates (both bonds and money market) and a strengthening Dollar, will cause financial conditions to tighten, which could easily raise the risk of recession starting in 2017.

So, here we have an environment where inflation is rising and policymakers are talking a narrative that would be very bond unfriendly, set against some well-worn bullish arguments. The key to rising bond yields would therefore appear to be a case of investors selling first and asking questions later. The fact that so many investors have been chasing yield in both longer maturity Government bonds and in the corporate bond market makes us wonder how sensitive these guys will be to further losses. Furthermore, there is a crowd of investors following risk parity investing styles that are using leverage to increase their returns from bonds. History tells us that leveraged investors have a relative limited appetite for carrying losing investments.

So, taking both the bearish and bullish theses into account, along with market positioning and psychology, we think that global bond markets are close to a tipping point. If losses continue to mount in the short term, this could turn into another bond tantrum similar to the period seen in 2013 when the Fed first mooted QE tapering. However, policymakers have serially failed to generate robust economic conditions, and will not want to see bond markets under too much duress. In short, it is crunch time in the bond markets.

It is interesting that so far the nervous trading has failed to knock the equity markets too much. The trading ranges that have become well entrenched remain intact, however, important support levels are not far away, and another bearish push in the bond markets could easily be enough to encourage some more serious selling in equities. Chart 2 below show the Eurostoxx 600 index of European equities, and we have highlighted in red the two areas of support that should be important in the near term. The overall condition is similar in the US, with important first support not far below current levels. We also note how even the high flying UK market (in Sterling terms anyway) is struggling at significant resistance in the 7000 area. 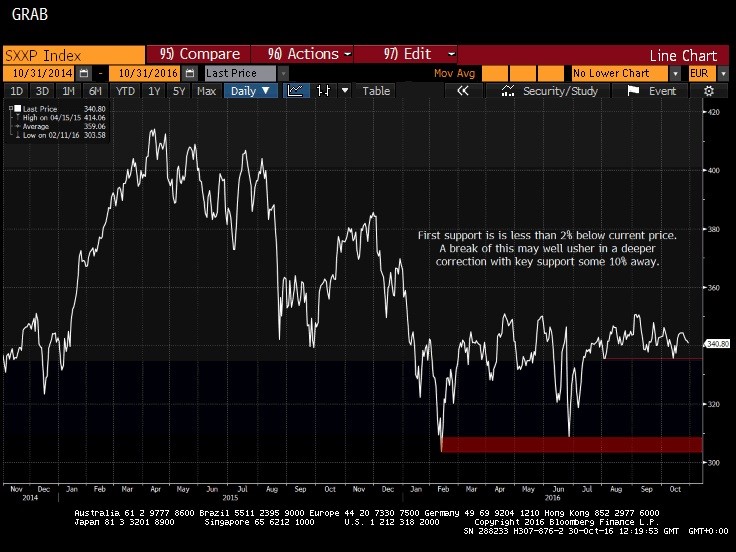 So, not only is it crunch time in bonds, but it looks to be the same in equities. Indeed, the worst case scenario is a period of intense selling in all mainstream assets which may well be triggered by both bond and equity markets breaking important support levels.

After months of watching markets churn around in a general sideways pattern, we sit here wondering whether now is the time that these markets breakdown, or is the building selling pressure simply part of the churn, and our bearish thesis unwarranted at this time. Simply put, the next few weeks are extremely important.