Hedge fund returns are a combination of alpha and beta risk exposure. The betas across different hedge fund styles are variable and dynamic. In general, beta will be below one with the majority of hedge funds showing market betas between .3 and .6. Some hedge fund styles like managed futures may be lower. Alpha can also be highly variable; however, we can say that in strong up markets hedge funds are likely to underperform the market return.  Similarly, in strong down markets, it is not clear that hedge funds will generate a positive return in down markets.

With SPX, as the market portfolio, down 1.73% and the small cap index (IWM) down over 4 percent, hedge fund returns this month were relatively attractive. At a .5 beta and a mix between large and small cap, equity focused hedge funds should be down around 2 percent minus any alpha. Those strategies like special situations, mergers and distressed which may have lower beta and higher alpha performed better. Those styles that are directional or may have higher risk given a focus on growth should have done worse. What was surprising in October was the strong decline with systematic managers and global macro managers. These styles should have done better in a down market. 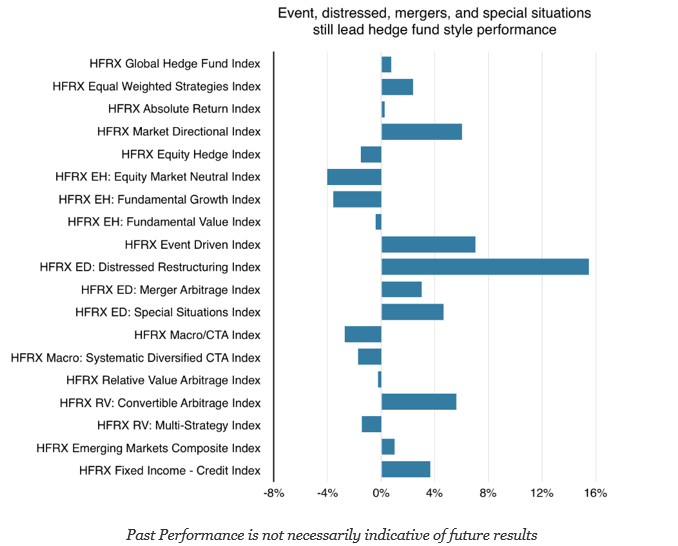 The year to date numbers are mixed with only 5 out of 19 HFR hedge fund style indices generating returns over 4%. Eight styles have negative returns through October. Small cap stocks were up double digit and the S&P 500 index was up over 7% over the same time period. Generalization should not be made, but holding passive portfolios have proved to be a better absolute return strategy so far this year.

A beta-adjusted (lower risk) strategy of stocks and bonds would have done better than many hedge fund styles in 2016. This difference has been increasingly the challenge put on hedge funds. Can hedge funds do better than a similar beta stock-bond mix? Put differently, can hedge funds generate consistent alpha? The answer seems to yes for some selected styles but no for most.