Anyone with grey hair is likely to remember studying the Philips Curve in his or her macroeconomics class, yet if you started to talk about the unemployment inflation trade-off today, you would be viewed as some “old school” thinker who is out of touch with reality. The Phillips Curve is an artifact of economic history. Is the Phillips Curve dead, another zombie model that walks around with no useful purpose? No.

This relationship still has value and will be helpful for thinking about 2017 investing. The investor just has to make sure that he accounts for the right variables. In this case, the key is the anchoring of inflation expectations. This anchoring of expectations and the lows sensitivity between inflation and unemployment means that there just is not going to be anything like what was normal in the in the 60’s and 70’s. Nevertheless, given the current positioning, we are at an elbow with the trade-off.

Using Ed Dolan’s graph from his blog, we can see that 2014 to the present was just a move down in unemployment with little change in inflation. Now we are close to hitting an employment wall, so there is likely a movement up in inflation like we have seen in some other cycles. Inflationary expectations have already turned but should start to accelerate if inflation numbers further turn up. 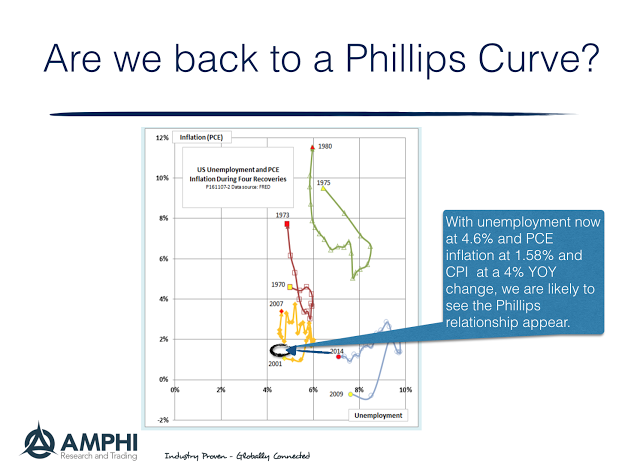 What we do know is that as we have closed in on the natural rate of unemployment. There has been a significant increase in the inflation rate if you use the CPI and not the PCE. Albeit not the same elasticity as before, there is again a trade-off as the slack in the economy has been taken out. We are in a new world where fundamentals matter and old trade-offs that we thought were long dead are coming back to live because constraints are binding. 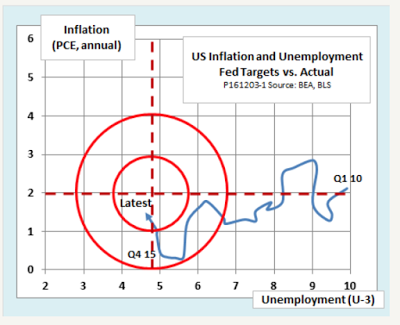 The Phillips Curve and the Fed target bulls-eye will set the tone for what will be relevant for investors in fixed income markets and with Fed action for 2017. Investors don’t need to follow Fed speeches; they can focus on the data.