Globalization is a critical part of macro investing. There can be talk of separation politics, but for investors, you have to focus on the global economic cycle because the world is highly integrated. What is very interesting is that globalization has been fairly stable between the current environment and the Bretton Woods period as discussed by the recent work of Eric Monnet and Damien Puy who studied long horizon data available from the IMF. They find that there were two common shock periods which caused a highly synchronous global behavior. The first was oil shock period of the 70’s and the second was the Great Financial Crisis. You could say that these were the two periods when “correlations went to one” across asset classes. There was no international diversification benefit. 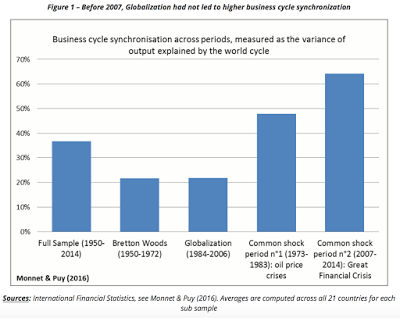 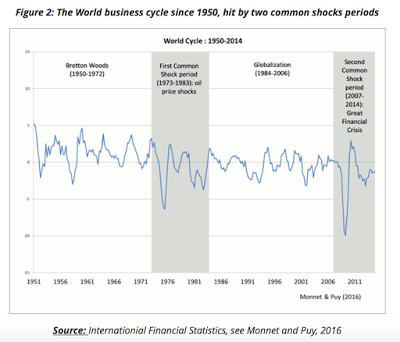 However, the output variance will vary across countries and time. If you want international diversification, you should focus on the countries that have the lowest variance explained by the world factor. The authors also found that which seems counter intuitive is that during normal times deeper financial integration tends to desynchronize national output with the world cycle. 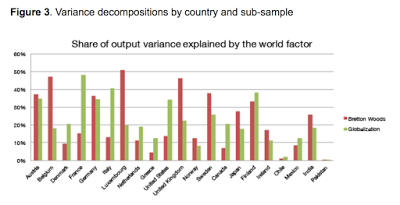 What does this mean from a practical sense for investors? For US investors, following the US business cycle and the Fed is not enough. This may seem obvious, but it has to be a point of focus given this new data. When there is a common global shock, there is no safety with diversification, the global business cycle will explain more than half of country variation. There is also no reversal to the old days. The era of capital controls and fixed exchange rates still had a high degree of business cycle integration. Financial integration and output integration are not the same thing and they may be negatively correlated. Finally, the data says that you should know your shocks. When there is a common global shock, the world can get exceedingly small.