Unlike earlier financial disasters, this one will emerge not because of too much speculation, but because of the inverse – too much hedging.
-William Silber on stock market in August 1987

Could this be the problem we are facing with the next financial crisis? There has a significant amount of talk about over-valuation in equities and the reach for yield in fixed income, but there has been less focus on how a financial crisis will evolve. It may not be from speculators changing their views on the market although this could be a catalyst. Selling could be driven by investors who are trying to hedge or mitigate their risk exposures. 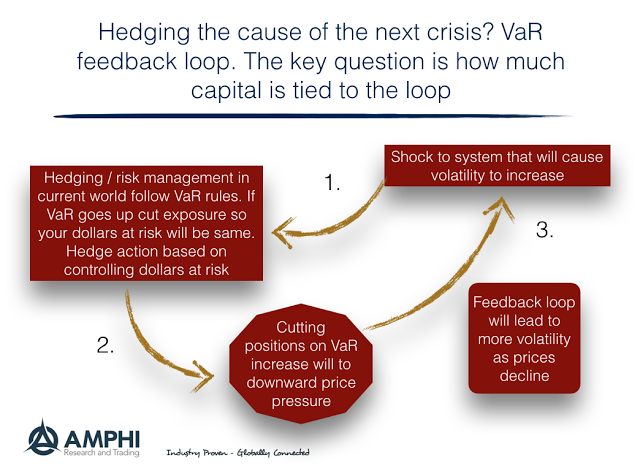 We can see a similar problem with the current risk management techniques that employ a form of hedging through cutting exposure on volatility increases. The feedback loop will add to selling when there is a volatility shock. An increase in VaR will cause investors to reduce their risk by selling the risky asset and buying the safe asset, similar to a portfolio insurance scheme. What is different is that investors will not sell just those assets that may be falling. There could be downward pressure on any markets that are seeing upward pressure on volatility. Positive feedback will actually place downward pressure on many markets.