A year-end performance review of styles, sectors, and country index ETFs shows the peaks and valleys for 2017 and what may be ahead in 2018. Overall, this was an especially good year for international investing and holding exposure in emerging markets. Large cap US which has strong international earnings also did well in 2017. Mid and small cap US underperformed during the year in spite of the resurgence in economic growth. The worst performing style was defensive dividend focused. Value underperformed growth by a wide margin.

Value should do better in an overvalued equity market while small caps should gain on the tax reform economic growth story. Right now, it is still a risk-on environment. 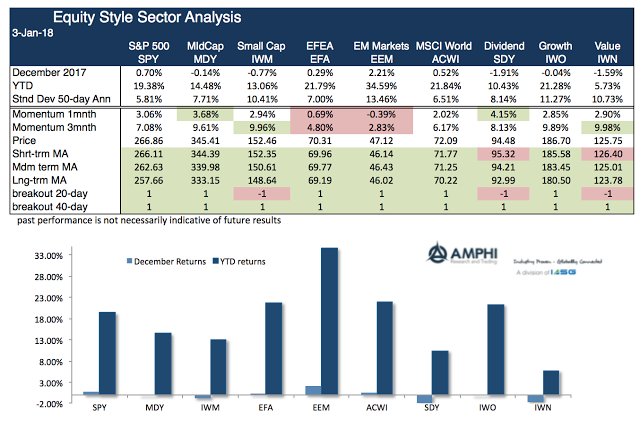 The dispersion in sector performance was over 35% with technology being the leader and energy being a laggard by a wide margin. Interest rate sensitive sectors also fared poorly with utilities and real estate both being below a 10% return threshold for the year. There were strong gains in cyclical industrial and consumer discretionary sectors especially in the second half of the year when growth surprises dominated behavior.

The stronger trend in oil and the concerns about overvalued stocks suggest that the extremes in these sectors may switch in 2018. Cyclical performance should continue based on the economic growth story. 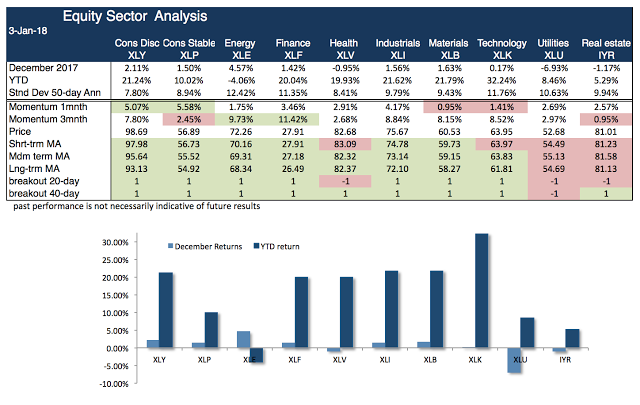 Country returns were all positive for the year with the surprising winner being South Korea in spite of the geopolitical turmoil on the Korean peninsula. Europe and Asia generated similar returns. Commodity driven country equity ETFs like Australia and Canada underperformed on a relative basis and Mexico was buffeted by the trade war talks earlier in the year.

Continued momentum in global growth suggests that global country exposures will continue to do well.

Bond performance was strongest in international and emerging markets based on improved credit risk and dollar weakening. The strong long duration Treasury performance was surprising given the strengthening economic growth. Demand for yield from credit continues albeit less so for the high yield sector. Other bond sectors were flat for the year. 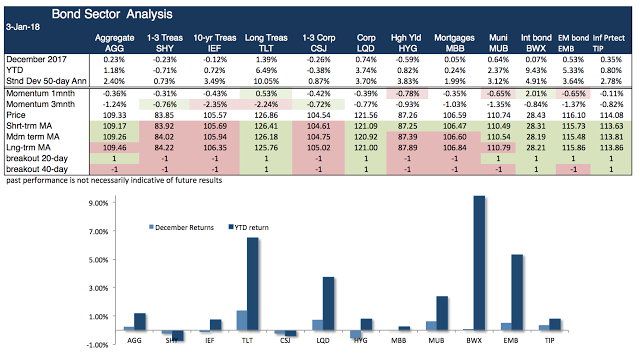 As I often remind myself, “trends are innocent until proven guilty”. While there are clear signal of overvaluation in both stocks and bonds, an immediate defensive portfolio may face a high opportunity cost for not being in the market.