Every Fed Chairman has their own variation on the market put strategy; Greenspan, Bernanke, Yellen and now Powell.  We can call this new one the “everything on the table” put strategy where the guidance of yesterday tells us nothing of what might happen tomorrow. This may be a reluctant put. Powell may have tried to stay the course for tightening, but a bear market can change the mind of many a well-intentioned central banker.

The Powell comments at the American Economic Association meeting were fourfold:

It is clear that the market has been expecting a change in Fed behavior from the policy of staying the course, just look at the probability of a rate hike since November. The market has believed that the Fed Chairman Put is still alive and well. 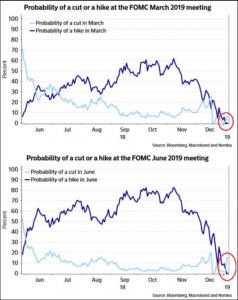 There should be no question that the Fed uses more than a Taylor Rule to determine rates; include financial stability. The Fed does not want to be known as a destroyer of wealth.