You should expect that if a group of college-aged students in economics and finance and young financial professionals were given a fixed amount of money and told they can flip and bet on a biased coin with a 60% likelihood of heads they should be able to make money. Don’t bet on it. “Rational decision-making under uncertainty: Observed betting patterns on a biased coin” by Victor Haghani and Richard Dewey  is one of those simple studies that really make you question the decision-making skills of even financial professionals. Just under 30% of the players in this game went bust and another 5% lost money. Just under 25% got it right in terms of using an optimal betting strategy that maxed wealth.

The game was simple with the subjects given $25 dollars and told they can bet and flip for 30 minutes in a controlled environment to maximize their wealth. Now, given the framework, the optimal betting rule to maximize wealth would be the Kelly criterion which would be a fixed portion of wealth used for each bet, (2*p-1) where p is the probability of success. Even assuming that the subjects did not know the Kelly criterion, a limited proportional scheme might make sense. Well, the researchers found subjects who bet it all, used fixed betting sizes, followed a process of doubling-down, and reversing the bet on heads based on the expectation of a reversal. You name it, and there were some educated ‘traders” who tried something that was not optimal. 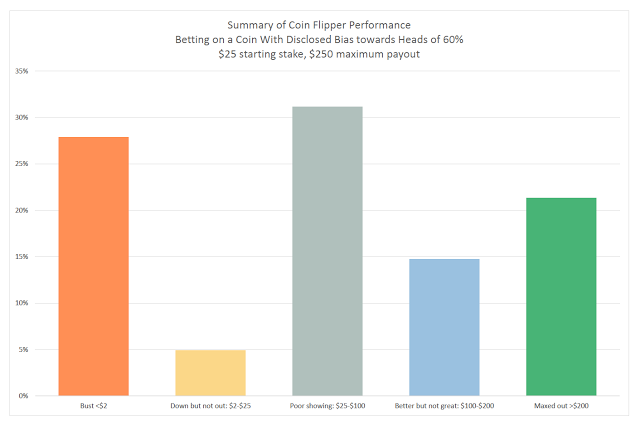 The researchers noted that none of the top business schools and most of the subjects have never been told or knew of the optimal betting strategy. That type of decision-making is not taught in finance.

The results really make you think. On the one hand, it makes you almost want to cry knowing that there are so few who may know how to size bets. Alternatively, you want to clap for joy for those who do know how to play the game, for those traders, there is opportunity. You have to say hats off for to all of the systematic traders who have embraced optimal betting strategies to ensure survival and maximize wealth.