While an investment in managed futures can help enhance returns and reduce risk, it can also do just the opposite and in fact result in further losses in a portfolio. In addition, studies conducted of managed futures as a whole may not be indicative of the performance of any individual CTA. The results of studies conducted in the past may not be indicative of current time periods. Managed futures indices such as the Barclay CTA Index do not represent the entire universe of all CTAs. Individuals cannot invest in the index itself. Actual rates of return may be significantly different and more volatile than those of the index.

A large sell-offs in bonds both domestically and around the world, a strong US equity move, and a strong dollar trend that changed perceptions on currencies, did not create an environment where managed futures were able to generate positive returns. I don’t want to be accused of hindsight bias, but a review of price trends in bonds and the dollar going into the election suggested that post-election moves, while extended, were not inconsistent with longer-term trends. Still, an early review suggests that there have been some major winners in this space who will end the year with strong positive gains. Careful CTA manager selection has meant the difference between success and failure in 2016.

Granted managed futures did better than bonds by over 6%, but the ability to short this sector should have been better demonstrated in performance. The SocGen managed futures index has declined in lockstep with the bond sell-off since July. What has been disappointing is the inability of some managers to fully exploit these bond market sell-offs. Systematic managers historically have had a hard time profiting from yield increases. 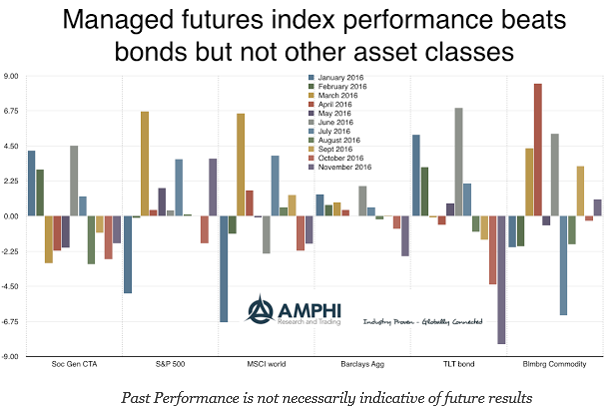 At current levels, it looks as though it will be difficult for the index to show a positive gain for the year. December is usually considered a short month given the Christmas holiday. Liquidity and trading volume declines after the December Fed meeting. Given an expected rate hike, there may be more positioning after the Fed meeting, but commodity volume will slow and equity moves are usually muted. Our expectation is that profits will have to be generated before December 22.