2016 became a great year for small cap, value, and growth indices post the US election. Investors are discounting changes in 2017 that will impact the bottom line for companies, so the new year will be about realizing those optimistic expectations. The recent declines versus short-term moving averages suggest that this euphoria is now being tempered.

For market sectors, the theme was about rebounding from more difficult times especially in the energy and finance sectors. These are two sectors that are strongly effected by regulation, so a new US administration which focuses on “reform”, that is, less regulation, will impact earnings. Nevertheless it is still early to say what will be the regulatory changes and how they will play out for firms. Consumer discretionary and stables showed more modest returns for the year which suggests that debt and real wages are still a drag on spending. Health care under performed for the simple reason that it almost impossible to say what this industry may look like in 18 months. 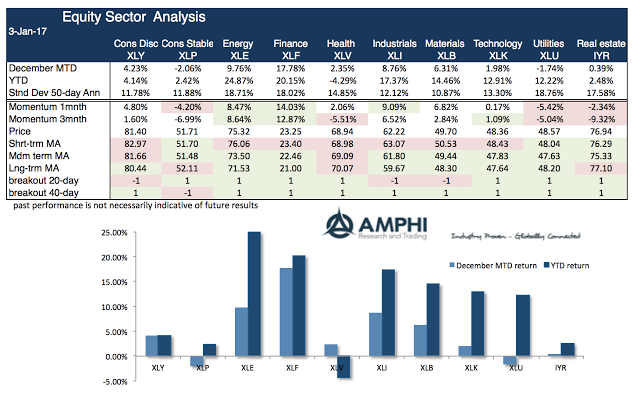 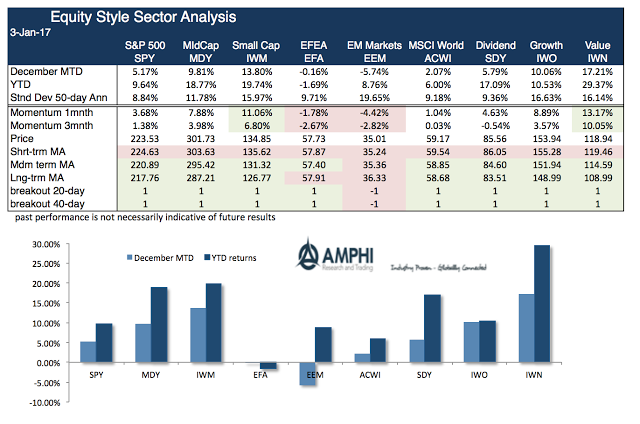 The bond sector continues to show weakness except for high yield which has been tied to the fortunes of the oil markets. The year shows flat performance in most cases which masks the wild return ride over the last twelve months. Strong double digit returns in long duration bonds were completely eliminated. Short duration served as low risk protection with the one good performer being TIP’s as inflation numbers and expectations increased. 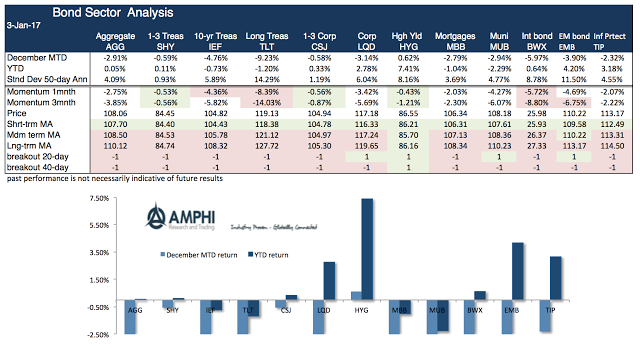 The country equity funds were closely tied to trade expectations with the big loser being Mexico especially since the US election. Asian countries closely tied to trade have seen a bumpy ride in 2016. Brazil has been strongest outperformed but has started to give back some of its strong returns from earlier in the year. Europe shows mixed returns consistent with the slow growth for 2016. The US rally has carried over to the rest of the world

The first quarter may become a period of wait and see until some of the US policy options become clearer. The strong optimism is not likely to continue unless there are concrete proposals that investors can translate into better earnings and sales.