“I would’ve created CAPM around semi-variance, but no one would have understood the math and I wouldn’t have won Nobel Prize…” H.Markowitz

Markowitz is probably right about his view on semi-variance, but there have been advancements that can help us employ semi-variance in our analysis. Still there is a need for more education on these dispersion measures. One recent paper in the latest Journal of Alternative Investments by Chambers and Lu called “Semi-volatility of Returns as a Measure of Downside Risk” effectively addresses some issues with these downside risk measures. Chambers and Lu develop the concept of semi-volatility as an alternative to semi-variance for looking at downside risk. The semi-volatility is less sensitive to some of the ambiguity that occurs with the number of sample observations in computing the semi-variance. Their measure has intuitive appeal relative to total variance and is easy to understand relative to skew and kurtosis which are both sensitive to outliers.

The idea is simple. Use as the sample the number of occurrences below the downside threshold and not the total sample. Of course, there is an adjustment factor, but this measure accounts for the actual downside events as opposed to the full sample which will reduce the impact of downside risk as the sample increases.

We have looked at the case of one manager who has two programs – a higher volatility version that is trend-following and another program which is diversified across a number of models. The diversified program has lower a volatility that makes it seem like it is less risky and it also has lower semi-volatility. Nonetheless, this semi-volatility is higher than what would be measured through the semi-variance. It is consistent with the skewness measures for each program. More importantly, it shows that the semi-volatility is higher for the “less risky” program on a relative basis. We think this new metric provides useful information on a manager’s downside. 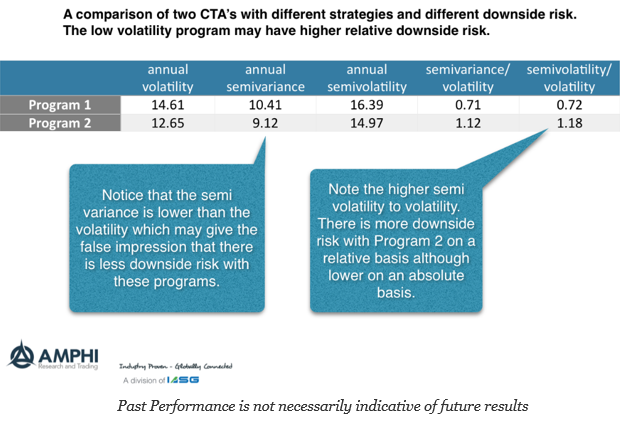 “I have set my life upon a cast,
And I will stand the hazard of the die.”
-William Shakespeare, Richard III