Without a doubt there has been significant concern about asset price bubbles. Even though there still is not a good working definition of a bubble. Many define bubbles as booms that go bust, but that only means that we will never know we are in a bubble until after the fact. Clearly, there has been vivid descriptions of some famous cases including the technology bubble in the US; nevertheless, a closely look at history suggests there have been many booms that have not been busts. While the chance of a boom leading to a bust is higher than a unconditional forecast, the number and frequency of busts is not so high as to say confidently that all large price moves will turn into crashes.

The work of Yale economist/historian William Goetzman in his paper, “Bubble Investing: Learning from History” analyzes the behavior of large asset price booms to determine whether all extraordinary increases lead to large crashes. His conclusion is that bubbles don’t always bust. This is odd given the view that whenever there is a market with accelerating prices, say a doubling in price, there is talk of a bubble. There is often as much talk of the potential price reversal as discussion for the price increases, yet the numbers tell us something different. 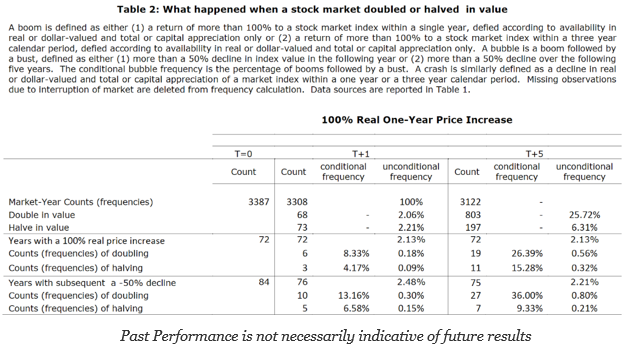 What makes this important is that the fear of booms and the potential for a bubble may be misplaced. There is a higher probability for a bubble when there is a boom, but the conditional frequencies are such that the idea that all booms should be avoided because there will be a crash may be misplaced. What goes up quickly does not have to reverse quickly. Concern for accelerated price increases, yes. Fear from market doubling as a basis for a bust, no.