The VIX index, the most widely watched measure of market volatility, is at extended lows with a jump lower after the French presidential first round election results. The uncertainty and risk premium from this election has been taken out of the market. Economic uncertainty has also fallen since the US election although it is still elevated since the earlier last fall. 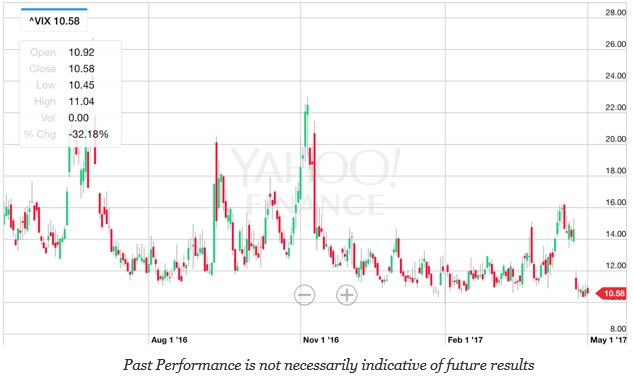 Is volatility a thing of the past? Well, it seems that way. We looked at close to 7000 daily quotes on the VIX since 1990 and found that current volatility is at the 1.45 percentile. It is low. These low values do not last, but any strategy that needs a spread in the distribution will not do well during these periods. 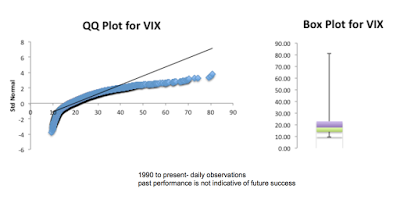 The question in not whether the VIX will change, but rather how long will the low volatility persist. The policy uncertainty index has fallen since the Brexit and election highs over the last year, but it is not at significant lows. The latest GDP numbers for the first quarter are lower than expected. Lower end economic performance usually is associated with higher volatility. 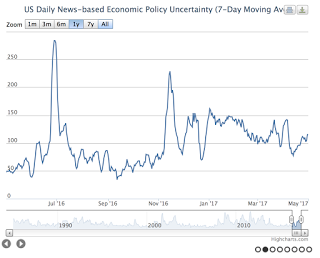 Given the distribution of VIX prices, a comparison of toady’s level versus the level in a month or two would not be helpful. Mean reversion will occur; nevertheless, the extent of the move may be limited given the clustering of low VIX values. There is a 32% chance of the VIX being below 15; a 50% chance below 18; and a 62% chance below 20.
The big move event is not likely if you are playing the odds. The numbers shows that upside jumps in the VIX are more likely than downside spikes. There is nothing usual with this behavior, but over any twenty day periods, there is only a 5% chance of jumping by more than 7 vol points and only a 4.75% chance of seeing a 40% or better up move over any 20-day period. Anyone expecting a big vol jump on mean reversion will be disappointed. This would still mean a vol that is less than 20 in the next month even if we had a significant spike.
We are not saying to accept low vol as a part of everyday life, but a return to anything like behavior during the Financial Crisis is unlikely.