2017 has been a risk-on year. It started with a risk-on sentiment for the US with the Trump trade and moved to a global phenomenon; however, as we end the first half of the year there is a growing level of concern across many market sectors. Short-term moving averages and break-out indicators have turned negative for a number of styles indices in June. While all major sectors except for value are positive for the year, there is the view that uncertainty and volatility may start to swamp the risk-on euphoria. Fears of over-valuation may be a topic of discussion, but money flows and price action over the last six months have told a different story. 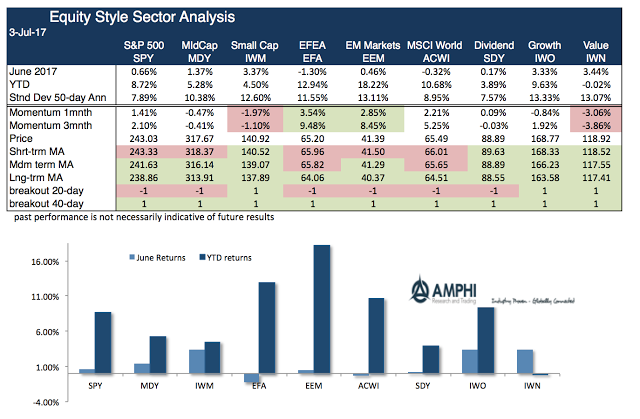 The bond sectors that all showed strong performance last month are starting to generate more mixed returns. June was not kind to bond investors. Most indices were down for the month on a price basis with coupon interest cushioning adjusted returns. A number of short-term moving average and break-out models have turned negative. Short-term indices are the only sectors for bond protection.

While the finance sector jumped at the end of the month on news of positive stress tests, many sectors showed strong declines. The technology, utilities, and consumer stables all declined by more than three percent for the month. Health care is now the best sector even with the health reform uncertainty in the US Congress. Sector dispersion suggests there is less common thinking on overall market direction. 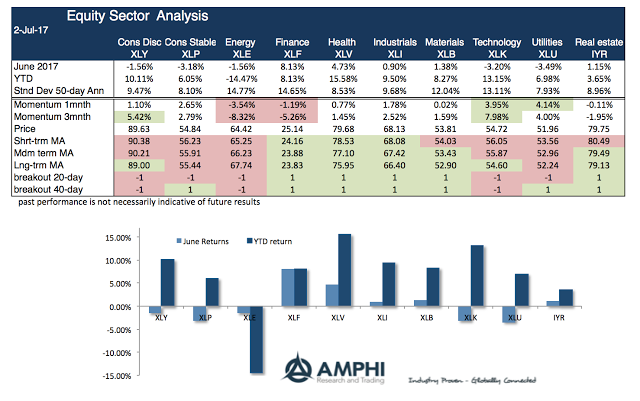 Country returns showed declines especially in the EU. Nevertheless June loses were not able to offset the strong first half of 2017 for many countries. It is interesting that South Korea and Mexico are market leaders in spite of the geopolitical uncertainty in Asia and the continued trade uncertainty with NAFTA. Fear of policy and political unknowns did not dampened investor behavior in the first half of 2017.