So when will regret be greatest for hedge fund strategy decisions? It should be tied to the dispersion in returns. If there is a wide spread between the best and worst strategy, there will be greater regret that the action taken could have been wrong. Similarly, there will be more loss aversion or regret for strategies that bounce around from the best returns to the worst. A hedge fund strategy that has more change in their strategy rankings may need higher returns to entice investors to hold given there may be regret.

We have looked at the dispersion of returns in the Eurekahedge data base of hedge fund strategies from 2000 through the first half of 2017 to get some idea of the dispersion in performance and the potential for regret. 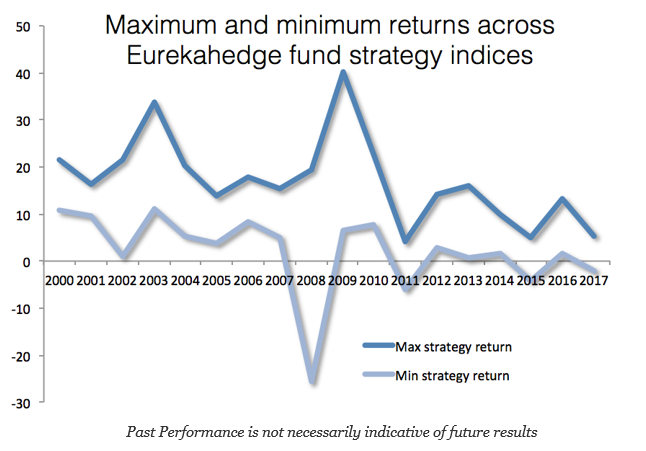 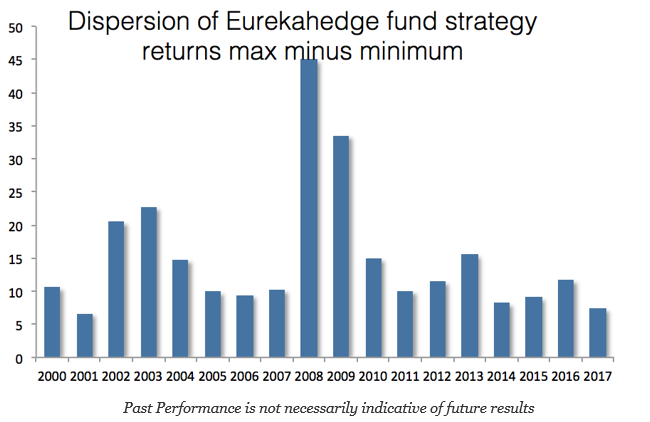 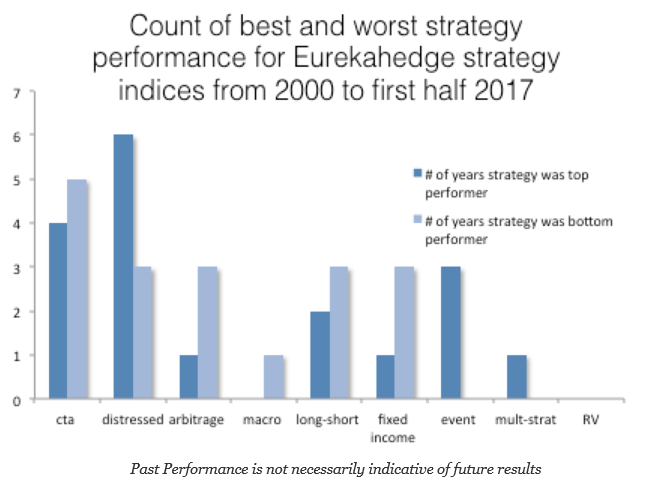 The maximum and minimum of hedge fund strategy returns have declined since the financial crisis. The minimum returns for strategies have hovered around zero and the maximum has fallen closer to ten percent. The dispersions of hedge fund returns across strategies have fallen over the last few years, but the important number is the wider dispersion if there is market turbulence or a crisis. Picking the right hedge fund strategy becomes all the more important when equity markets sell-off and there is a increase in correlation across asset classes.

However, the data get very interesting once you move to strategy specific analysis. We conducted a simple analysis by asking the question, “How many times is a strategy the best performer or the worst performer in a given year?” We are looking at nine strategies over 17 years, so there are a total 34 best and worst events. All things equal, there is a 1/9 chance that a strategy will be worst in any given year. Clearly, more volatile strategies are more likely to be the best or worst, but we want to focus on the potential for regret.

Given the extreme good and bad performance for managed futures (CTA’s), there may be a wariness by investors relative to multi-strat or macro which are more likely to always be in the middle of the pack with performance. A focus on regret is real given the chance to end up “wrong” with a strategy choice.