Managed futures, as a hedge fund strategy, have moved off of its max drawdown since June, its worst drawdown in the last five years, as measured by the SocGen CTA index. For some investors this type of drawdown means an exit from the strategy; however, some of the broader data on manager selection suggest a different approach. The idea of being careful about making investment decision based on a drawdown is consistent with the mean reversion performance analysis of winners and losers.

See,
“Buy the losers and sell the winners? Reverse your thinking and be careful about avoiding or exiting losers”
“Predicting managed futures returns – Follow the mean reversion” 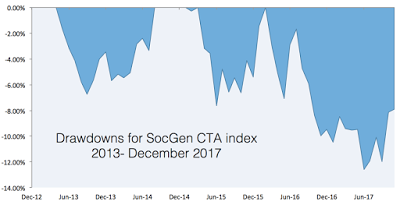 Some things to think about before using a drawdown as a decision variable:

Bad performance should not be rewarded with slow response, but the reasons for the poor performance should be studies closely. Think of all of the due diligence required for a buy decision. The same careful analysis hold be done on an exit; however, the process may have to be done much more quickly when real dollars are at risk.