“Oh my god, the unemployment rate is below the natural rates, sell your bonds!”

This has been the usual bond market reaction for the last few decades, but the world has changed. There may be good reasons to sell bonds, but a low unemployment rate may not be the main driver. Investors need to kill off the idea of the natural rate of unemployment or at least modify their views. That does not mean that bonds will not react to low unemployment rates, but the current sensitivity is significantly different than what we have seen in the past.

As stated by Keynes, “Practical men, who believe themselves to be quite exempt from any intellectual influences, are usually slaves of some defunct economist.”

All of macro investing has been embedded with the teaching of the natural rate hypothesis. See “Should we reject the natural rate hypothesis?” Olivier Blanchard Journal of Economic Perspectives Winter 2018. Any manager who is thinking about the inflation and interest rate problem is likely using the framework taught them in their introductory macroeconomics class. Simply put, there is a natural rate of employment which clears the market and that monetary policy cannot sustain employment below this level without incurring higher inflation. It is assumed that the natural rate can be identified and the pushing on the equilibrium level will lead to inflation acceleration.

Most of the hand wringing by bond traders is based on the idea that as we push unemployment lower we are causing more inflation pressure to build. The empirical evidence suggests that old theories are just not as robust in the current environment. The sensitivity between inflation and unemployment is lower and the expectation sensitivity of consumers and forecasters is different than in the past. See the statistics from Blanchard. 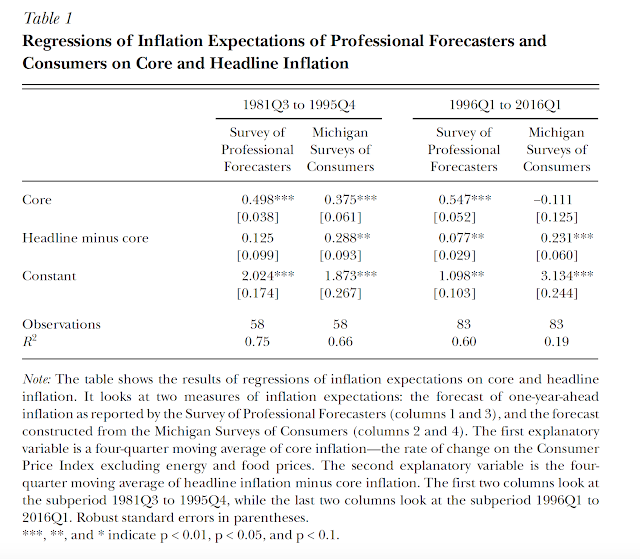 The natural rate can be a good null hypothesis, but investors have to keep an open mind and put some weight on alternatives factors or theories such as labor participation and output gaps to gauge current lack of inflation sensitivity to the natural rate. The current lack of sensitivity has harmed traders who have been grounded in past thinking. The big bond trade will come if the sensitivity of inflationary expectations changes back to the 90’s; however, this type of change is unlikely to occur quickly.