…the public psychology of going into debt for gain passes through several more or less distinct phases:
(a) the lure of big prospective dividends or gains in income in the remote future;
(b) the hope of selling at a profit, and realizing a capital gain in the immediate future;
(c) the vogue of reckless promotions, taking advantage of the habituation of the public to create expectations;
(d) the development of downright fraud, imposing on a public which has grown credulous and gullible.
“The Debt-Deflation Theory of Great Depressions” Irving Fisher 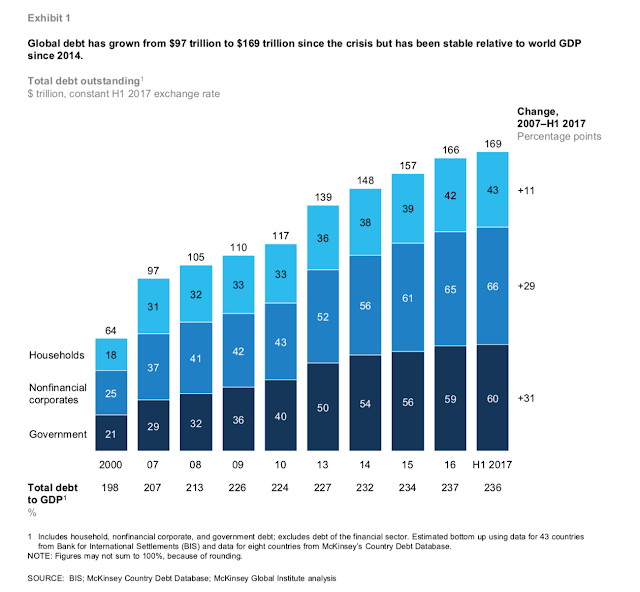 There are two sides to every debt story. Firms, governments, and households have been borrowing more. The size of debt is significantly larger than what was seen at the end of 2008. The debt to GDP globally has increased over the same time period. These borrowers believe that their ability to pay back their debt will be the same or better in the future. Debt has been used to buy other assets under the hopes that they will increase in future value to pay the principle. If this optimistic future does not arise, future growth will be impeded. On the other side, lenders have extended funds to borrowers under the optimistic hope that their reach for yield will continue to increase their wealth.

Many have been talking about the debt deflation theory of Fisher for years as the debt levels rose over the last 10 years. It was supposed to be coming, but never materialized. Now we have inflation, so many will think the debt-deflation scenario cannot happen. We will inflate our way out of this problem. Unfortunately, while higher inflation may help all borrowers, the complexities for any given borrower increases.

The nominal rates are rising and real rate of interest may be increasing. Foreign debt denominated in dollars is becoming more expensive. Refinancing has to be done at higher rates for firms that may not have control over prices received. Inflation while defined as a general price increase may be higher variables at the local level.

The uncertainty of higher nominal and real rates, variable inflation, currency changes, and variable growth all contribute to a change in the optimism that caused more borrowing. A change in these expectations will rob current borrowers of refinancing and rob lenders of a chance to see a return of the funds. Financial assets will deflate, wealth will decline, and future growth slowed.