Simple visuals can be very powerful at telling an effective investment story. I have compared equities, bonds, and commodity relative returns for the last twenty years to see the big wave cycles that investors needed to participate in to have a successful portfolio. The trends from these asset class cycles are long. An investor does not have to get in on the turning points, but they do need to hold the trends as long as possible. The secret to relative asset class success is commitment.

There were four long stock/bond waves for investors. First, there was the decline after the tech bubble which lasted until the fourth quarter of 2012. This period was followed by the rally before the Financial Crisis. The Financial Crisis generated a sharp decline in cumulative returns. The post Financial Crisis rally is notable for the size and length of the reversal. It is still ongoing. These major asset class waves are well known. 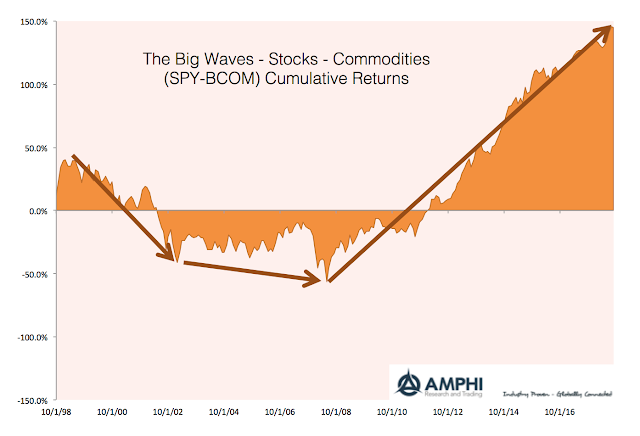 The stock/commodity waves are less well know but much larger. There were only two major waves: the commodity super-cycle gain and the reversal since the Financial Crisis. The extended rally in equities over commodities is outsized relative to anything seen in the prior decade. While the size of the equity gains seems over-extended, it actually is a reflection of the structural change in commodity usage. 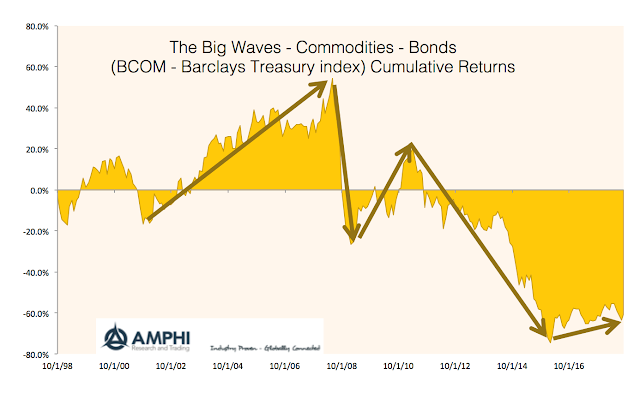 The relationship between commodities and bonds is muted relative to equities but tells a more complex story. Commodities outperformed bonds during the super-cycle only to reverse during the Financial Crisis. However, there was a mini-rally after the Crisis followed by the cycle adjustment. More recently, we are seeing small gains versus bonds and switch back to commodities.

Regardless the type of investor: trend-follower, value, passive or active, the large waves in relative performance affect the larger portfolio composition and performance.