Russia broke the oil market!  Russia and the Saudis have entered into a dangerous game of chicken with each other.  Russia is determined to punish US Oil Producers while the Saudis are attempting to force OPEC+ back in line. To simplify, Russia would not comply with OPEC+ to extend cuts and possibly deepen them, so in retaliation, the Saudis lowered its official selling price (OSP).  This OSP affects about 14 million barrels per day (mb/d) for various oil grades and locations.  See below chart for an idea of just how monumental and gigantic the OSP cut was. 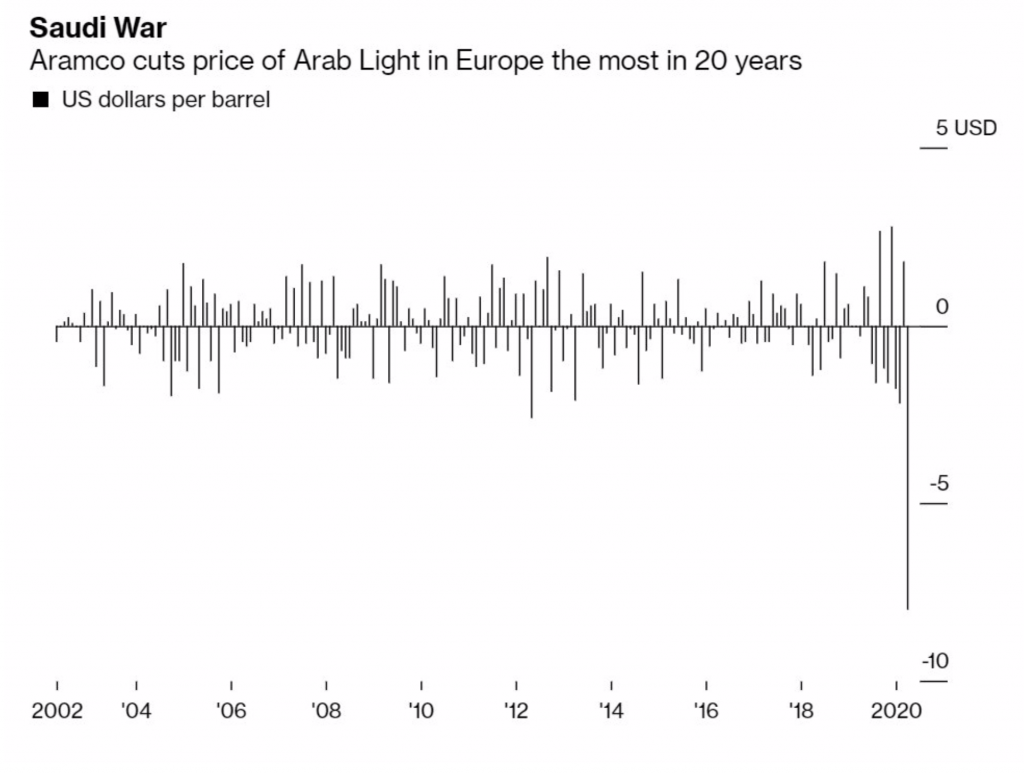 The Saudis also followed this with a pledge to ramp up production to over 12 million barrels in April (as of last OPEC MOMR Report, they produced 9.7 mb/d) a jump in production of over 2.3 mb/d.  These moves are a clear signal that we have entered into an ‘every country for themselves’ regime shift.  Each country has its own complicated geopolitical and monetary reason for making the move they did, but the fact remains, oil is going lower as a result.

Lastly, we believe that COVID-19 is the catalyst to send the global economy into a recession.  We are just starting to see supply chains breaking down and are beginning to realize how many small nuanced parts in our economy China produces.  What happens when the actual economic data starts getting published?  How are earnings going to look this year?  What monetary weapons do we have to fight this?  Will there be quarantines and travel bans in the US?  All bearish macro and oil events.

In China alone, the COVID-19 demand shock has led to 60 million barrels of oil going to storage in February. This 60 million figure does not even capture the pullback in global travel that occurred over the last two weeks of February or the first week of March so far around the world. I anticipate that in the coming weeks, we will see massive revisions lower in global demand forecasts from banks and analysts. Stockpiles are going to build for most of 2020, and there are some areas where we may be close to filling up max storage.

At Cayler Capital, our models anticipate prices moves and trade the fundamentals of COVID-19, OPEC, and the looming demand shock. We are now up 14% on the year (past performance not indicative of future results) and hold a sizable short oil position accounting for 60% of our current VaR. We believe that oil will break the low of 2016 and possibly test the teens. We don’t think Russia or the Saudis are going to back down and will continue to oversupply the market in the near term.  By summer, we should have a clearer picture of the demand side and will know the extent of the destruction (newsflash: it’s going to be bad).  There will be a rash of bankruptcies in the Shale patch followed by turmoil in the middle east which will slow the stock builds but not stop them.

The time to take a hard look at energy exposure in your portfolio is now. Don’t invest in oil companies that can go bankrupt, invest in the underlying commodity, and a firm with s multi-year winning track record. With the S&P volatility at all-time highs and a more significant pullback looming, now is the time to diversify into a direct investment in energy.

We use a quant-a-mental approach to the markets and are capturing 1,000 data points daily that track the movement of oil around the world.  We have caught the significant moves this year because we are one of the best at using big data and algorithms to analyze the vast array of fundamental data in the oil market.