Commodities have not behaved like other asset classes since the Financial Crisis. In spite of all the monetary easing and the lowering of interest rates, commodities have marched to their own drummer, or, put differently, the commodity cycle has been independent of the business, financial, or monetary cycles. It is because of this difference that commodity exposure may look more attractive than traditional assets.

To place in context, let’s look at the major trends in the two leading commodity indices the SPGSCI and the BCOM (Bloomberg Commodity index formerly the Dow-Jones UBS index or DJP). The major difference between these indices is the higher energy exposure in the SPGSCI.

If we had to breakdown the behavior of the indices since the Financial Crisis we see four or five major trends. First, there is the pre-Crisis super-cycle which peaked in mid-2008 before the worst of the Financial Crisis. The steep decline was consistent with the economic slowdown that was already occurring before September 2008. The second leg of the major commodity trends for the last 15 years was the financial crisis. All risky assets correlated to one as there was a single factor that was driving the market declines. The third part was the initial recovery after the market bottom in March of 2009 The pre-crisis excess, Financial Crisis fall, and partial recovery are consistent with the behavior of financial assets. 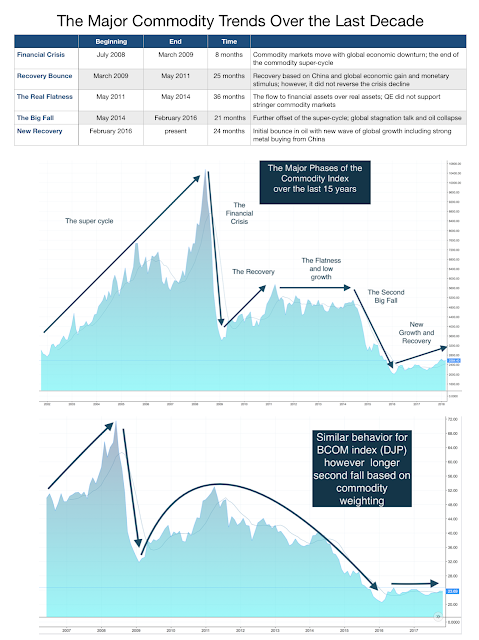 The next phase of the price moves separates commodity indices from financial assets. The combination of the European debt crisis, the decline of China growth from 12% in 2010 to 7% in 2015, and the ongoing below trend growth in the rest of the world curtailed demand in a commodity world of excess capacity. Commodities were more linked to economic activity than financial assets which responded to excess central bank liquidity.